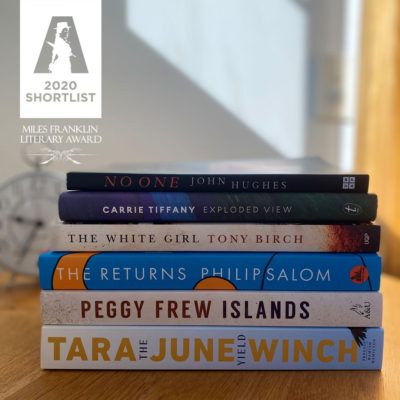 The shortlist for the $60,000 Miles Franklin Literary Award 2020 has been announced.

The six longlisted novels are:

Each of the authors shortlisted for the 2020 award will receive $5000 from the Copyright Agency’s Cultural Fund.

‘The books on this year’s shortlist, diverse in form and tone, all explore the effects of trauma,’ said State Library of NSW Mitchell Librarian Richard Neville on behalf of the judges. ‘From familial stories of neglect and abuse to the national story of racial and cultural dispossession, these novels demonstrate powerfully how past trauma continues to inform the present.’

The Miles Franklin is Australia’s richest literary award and is supported by the Copyright Agency’s Cultural Fund, alongside award trustee Perpetual. This year’s shortlist was announced on Wednesday, 17 June via live YouTube stream. The winner will be announced on Thursday, 16 July.