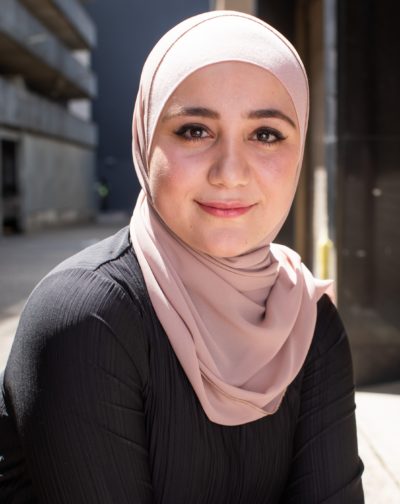 Rawah Arja is a writer and teacher from Punchbowl, Sydney. In her debut YA novel The F Team (Giramondo, September), which is set in her home suburb, Arja explores family, friendship, love and self-worth through the story of Tariq and his friends, who join a rugby competition in order to rehabilitate the public image of their school. Reviewer Tracy-Kate Watts said Arja expertly expresses the difficulty of transitioning from adolescence to adulthood in a coming-of-age read that is ‘full of heart and the importance of community’. She spoke to the author.

The F Team is set in Western Sydney in a predominantly migrant community. Are there parallels between your experience of growing up and that of Tariq and his friends?

The F Team is set in Punchbowl in South West Sydney, the same suburb I was born and raised in. It was important for me to show what life is really like in my hometown, a place I love so much, instead of all the negative stories that seemed to be on repeat on every news channel. It’s not to say that my suburb is completely free of crime or gangs, but there was more to our stories than what people were being told. And who better to tell our stories than someone from the community that the younger generations could identify with? I am one of them.

My experiences growing up were of spending endless hours roaming the streets with my cousins playing knock and run on our neighbours’ doors, or running away, yelling stranger danger from any so-called black ‘kidnapper’ van. Well at least that’s what our super paranoid migrant parents told us. In saying that, Tariq and his friends in The F Team are no different to myself and my cousins. Our families are always around one another, eating way too much food or heading to Sans Souci beach every other Sunday—which we still do. I wanted to highlight the fluidity of the concept of family in all its forms, whether it be with friends, schoolmates and teachers, or people from the opposite side of the world—which in the case of the book is Cronulla.

Punchbowl High is a real school that had the same issues as the ones outlined in the novel. Why did you choose to base your novel on real-life events?

It seemed to me that not only was it long overdue for a female Muslim writer to take ownership of a narrative that was starting to sound like a broken record, but it was also important to shed light on reality from the perspective of someone who actually lives and breathes in and around the suburb of Punchbowl.

As a teacher, I’ve taught students like the ones in my book since they were young kids in primary school, and I see myself in them. I know what it feels like to have society look down on you either because of the place you live or the religion you follow, so for me it was important to let those students know that there are people out there willing to fight for them and their stories—but in saying that, they’d have to come halfway and take ownership of the decisions they make too.

Tariq has a lot of anger. Why did you feel it was important to discuss anger and the healthy and unhealthy ways to deal with it?

Growing up, I was lucky to be raised by parents who used every moment of their lives to teach my brothers and sisters (all seven of us) how to deal with our emotions, especially anger. Now I’m not saying we’re all saints, but we had an amazing support network at home that gave us the necessary skills to deal with life’s curveballs.

Unfortunately, in my experience as a teacher and a youth mentor I’ve seen first-hand not only what the lack of support does to one’s emotional capabilities, but also how that affects one’s relationships and the decisions they make. Tariq and his team represent the many young kids I’ve come across and shows that there is a desperate need to highlight anger in all its forms, to help us understand what can be done so that it no longer dictates the choices they make. I wanted to highlight that being angry doesn’t mean you’re a bad person and that it can be used to drive us forward. With the right people around you, whether they are friends or mentors, anger can be redirected and can have a positive influence on one’s life. In fact this is how The F Team was created—from anger and frustration at being part of a community and religion that seemed like the constant target of negative attention from the media.

What are the lessons you think young people should take away from The F Team?

If you want change to take place, then take control of the narrative and start to live your life as though you have nothing to lose. It’s what I told, and still tell, myself any time something doesn’t work out the way I thought it would.

I’m a female Arab Muslim wearing a hijab so you can imagine that I’ve heard some pretty colourful language, yet I’m still here and more resilient than ever. The characters in the book were written in a way that not only are they relatable, but they also go through a journey that intertwines with people from all walks of life. They learn that success doesn’t come overnight and there’s no magic potion to make their problems go away; they need to be willing to work hard to ensure they not only create positive change for themselves but for their community and the people they love.

How important are mentors such as Mr Archie?

If someone said to me when I was 12 years old that when I turn 30, I would have my first book published, I’d think they were nuts. Not only did I hate reading as a kid but I never saw the benefit of it and would much rather watch TV. Then September 11 happened and watching TV wasn’t fun anymore. The relentless news breaks between my favourite shows were a constant reminder that I was the bad guy—and because I never read, I felt lost and feelings of worthlessness seeped in. I wanted more than anything to shout from rooftops that we Muslims were a peaceful people and we were just as hurt as everybody else, but I didn’t know who to turn to. I had no role models I could write to for guidance.

Then one of my favourite teachers, Miss K, who’s in The F Team as a mentor to Tariq, gave me a book called Looking for Alibrandi by Melina Marchetta and it changed my life. That simple act turned me into an avid reader, and I no longer needed to search for mentors in the real world. I found them in books. I realised in that moment, all those years spent watching TV wasn’t because I hated reading, it was because no book had spoken to me.

We take for granted the effect of seeing oneself in print, of having characters you can connect with, places that aren’t so foreign and family traditions that are familiar. Soon I discovered another book called Does My Head Look Big In This? by Randa Abdel-Fattah, and through the power of words I didn’t feel so lonely anymore. Seeing a Muslim writer like Randa opened a world of possibilities for me. If she could break through and make it, so could I. And as crazy as that was, Melina and Randa both endorsed my first book, The F Team!