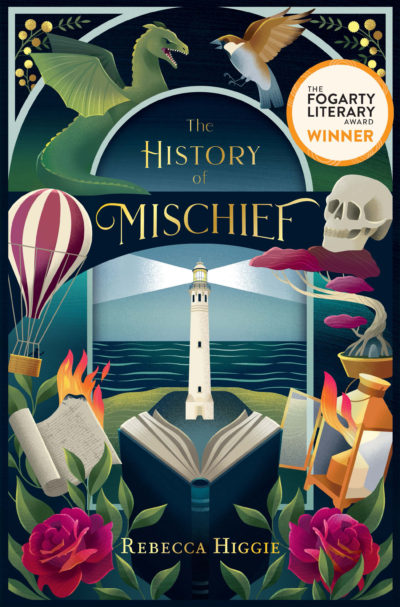 The History of Mischief is an exploration of family, grief and the power of stories, with a pseudo-historical twist. Nine-year-old Jessie is struggling with the loss of her parents and her changed relationship with her older sister-come-guardian. That is, until she discovers a book hidden in their grandmother’s old house—The History of Mischief—an account of persons throughout history with a magical prowess for mischief. Rebecca Higgie skilfully alternates between chapters of the titular book—from a slave of Alexander the Great’s to a library attendant in Victorian England— and Jessie’s own story. Each ‘history’ is a powerful, fabulist short story in its own right, exploring the brutality and the beauty of humanity. Higgie also successfully utilises the perspective of a younger protagonist to highlight the foibles, both humorous and tragic, of societal expectations about grief. The book’s downfall, however, is its final act. Intended as an intricately plotted twist, it is instead a tonally incongruent shift, and difficult subject matter—previously handled with care and sensitivity—is suddenly introduced without any scaffolding or deeper exploration. As a contemporary mystery masquerading as a historical fantasy, it is difficult to pick the target audience of The History of Mischief. Though thematically similar to Patrick Ness’ A Monster Calls, it is better suited to older teens (16+) and fans of historical and intergenerational dramas, such as Jackie French’s ‘Matilda’ series and Maureen McCarthy’s The Convent.

Jordi Kerr is a freelance reviewer and youth literature advocate.