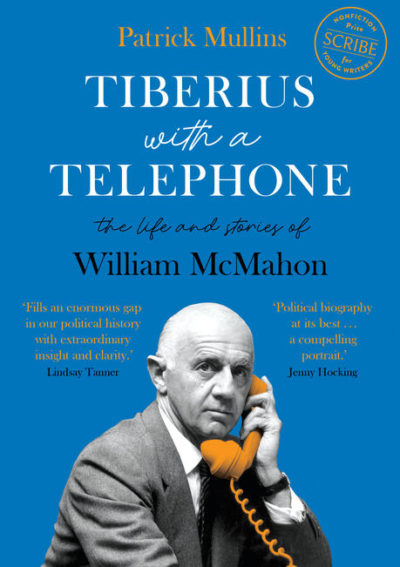 Patrick Mullins has won the 2020 National Biography Award for Tiberius with a Telephone: The life and stories of William McMahon (Scribe).

Mullins receives $25,000, while the other shortlisted authors receive $2000 each.

The judges said: ‘Mullins has produced a sweeping comedy of manners: sophisticated in its handling of political and social context, a pleasure to read and with a feel for the absurd. He marshals the apparently trivial incident to reveal so much of how politics was done through the 1950s and 1960s.

‘Mullins cleverly interweaves McMahon’s life and times with an account of McMahon’s futile efforts to write his own story: the result is a biography that not only tells much of its subject but of the nature of biographical writing itself.’

Also announced was the $5000 Michael Crouch Award for a debut, which went to Hearing Maud (Jessica White, UWAP). The judges described White’s biography of the daughter of expatriate Australian colonial novelist Rosa Praed as ‘a skilful combining of the genres of biography and memoir’.

‘Maud’s profound deafness deeply affected her life’s trajectory, as a clever and accomplished young woman ends her life lonely and paranoid in Holloway Sanatorium. White brings to her account careful research, an excited sense of discovery and, above all, her own experience of deafness after contracting meningitis at the age of four.’

In accepting the award, the author thanked former UWAP director Terri-ann White, describing her departure from the publisher as a ‘significant loss for Australia’s literary ecosystem’.

The winner was announced by the State Library of New South Wales (SLNSW) online on Friday, 28 August. For more information about the awards, visit the SLNSW website.