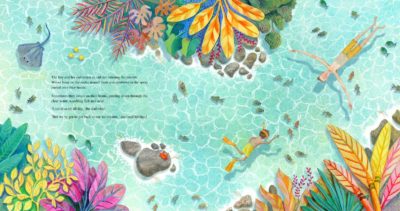 Hachette NZ and the Margaret Mahy estate have announced Nelson-based artist Lily Emo as the winner of the 2020 Margaret Mahy Illustration Prize for unpublished illustrators.

Unpublished New Zealand artists were invited to illustrate Mahy’s story ‘The Boy Who Made Things Up’. According to the judging panel there was ‘a clarity and freshness’ to Emo’s prize submission. ‘The winning submission took our breath away with its vibrancy and seamless integration of the digital and traditional media,’ said the judges.

Emo receives NZ$1000 cash (A$923), NZ$500 worth of books and the opportunity to discuss  developing her illustrations for publication. Two runners up, Cesar Lador and Rehua Wilson, receive a collection of books valued at NZ$250 (A$230). The winning entries were chosen from over 50 submissions and 350 expressions of interest.

Now in its second year, the prize was established in celebration of the 50th anniversary of Mahy’s first published picture book, A Lion in the Meadow. The winner of last year’s competition was Christchurch illustrator Sarah Greig, whose illustrated edition of Mahy’s The Boy With Two Shadows will be published by Hachette NZ in late October.