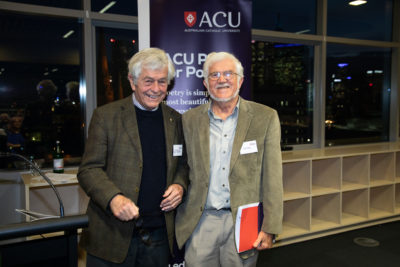 Fiona Lynch received the $5000 second prize for ‘Footprints’ and Damen O’Brien received the $3000 third prize for ‘Atlas Carried the World’. The winners were chosen from around 500 entries and a shortlist of 45 poems.

Judge Chris Wallace-Crabbe praised Page’s winning poem for its ‘richly coloured response to this year’s theme, “Generosity”’. ‘It was a delight for me to read the verse that rolled in for this year’s ACU Poetry Prize,’ said Wallace-Crabbe. ‘Poetry can speak to us all, but in many creative hats and guises. This art gives us its message at the very same time as it delivers the music and magic of our language. Such is its generosity.’

Page previously won the award in 2017 and was runner-up in last year’s award.

The annual prize is sponsored by ACU’s office of the vice-president, led by Father Anthony Casamento, and ‘continues the tradition of the Catholic Church as a key patron of the arts’.