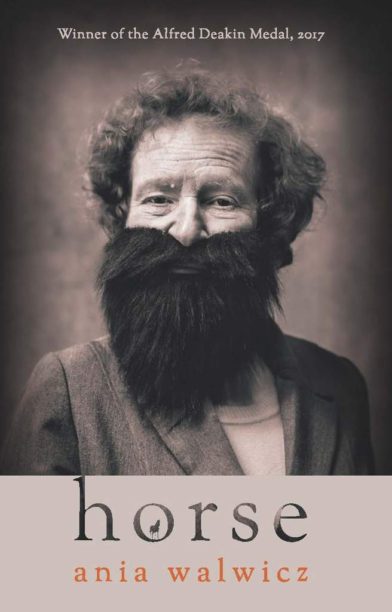 Born in Poland in 1951, Walwicz emigrated to Australia in 1963 and studied at Melbourne’s Victorian College of the Arts. She published seven books, beginning with her 1982 poetry collection Writing and including Boat, which won the 1990 Victorian Premier’s Literary Award for new writing.

Walwicz was a writing teacher at RMIT University for 30 years, and wrote her final work, Horse, as part of her doctorate at Deakin University. Published by UWA Publishing in 2018, Horse won the Alfred Deakin Medal in 2017 and was shortlisted in the 2019 Mascara Literary Review Avant-garde Literary Awards.

‘After reading Ania Walwicz since the 1980s it was a delight to have her offer her new book to me a couple of years ago. Often people in the book business underestimate the impact work from a solidly experimental base has on “ordinary” readers. Ania’s poetry was taught in high schools for many years and there is no doubt that it cut through for many schoolchildren and probably made poetry approachable to them.

‘Her work was always audacious, direct and often hilariously funny—black humour, no doubt, but also with the hit of an outsider-insider observational stance. Having heard Ania read her work, she brought those extraordinary rhythms and intonations alive for every time I read her on the page. Ania’s reputation as a teacher and mentor is a testament to her commitment to literature and ideas. Vale, Ania Walwicz.’

‘Dr Ania Walwicz, inimitable artist and writer, died on 29 September. She was admired and adored by a legion of friends, students, colleagues and collaborators. We are all in shock at this news.

‘Ania was born in Poland, and arrived in Australia as a 12-year-old, going on to study visual art at the Victorian College of the Arts, but words were her truest medium. She published seven books and her work appeared regularly in literary journals and was widely anthologised. Her final book, Horse, was published in 2018 by UWA Publishing, and arose from the PhD for which she won Deakin University’s Alfred Deakin Medal. It was launched, fittingly, at the art gallery in RMIT University’s Building 94, home to the Professional Writing and Editing program where Ania had taught for almost 30 years. In her element: performing, and always dressed for impact, she donned a fake beard and oversized back-to-front coat of ruby red to read to a smitten crowd.

‘Ania came to attention in Melbourne in the early 80s, a period energised by feminist theory, creative collaboration, multiculturalism, and a post-punk ethos. In 1982, she published her first book, Writing, with Rigmarole Books, and was included in F(r)ictions, the inaugural anthology from Sybylla Feminist Press. Novelist Enza Gandolfo recalls early works “Wogs” and “Australia”: “These pieces meant a lot to me, they voiced an experience that had rarely been voiced in Australia. She wrote playfully but with bite and power about the migrant experience.” Sound artist Ros Bandt recalls, “The first sound poem I ever heard from a voice lying on the floor dialoguing with four speakers. Unforgettable.” To Max Delany of the Australian Centre for Contemporary Art she was memorably “a crossover figure avant-la-lettre.”

‘Although usually described as a poet, Ania’s writing transcended conventions of genre or form. Punning, sensual, hypnotic, incantatory, hers was an erudite and artful stream of consciousness steeped in fairytale, literature and psychoanalysis. The impact was amplified in performance, and for Ania, life was art and always performed.

‘Ania’s influence on her students was profound. Would-be writers who came to Open Day or selection interviews would meet a true eccentric, eager to talk films seen and books read, with scant regard for set questions, tight timeframes, or formalities. Once in her classroom, there was little instruction, but wide-ranging ruminations on art and literature, opportunities to read and write, kindness and encouragement, and an exhilarating freedom to experiment. There was also exposure to various personal obsessions (Elvis, who came to Ania in dreams; Mr Boopee, her much mourned cat; Inspector Rex, her favourite TV show) as well as delighted discoveries (YouTube! Patti Smith! gangsta rap!). Many students went on to become her friends, even collaborators.

‘Among the many tributes that followed her death are those from former students Koraly Dimitriadis (Meanjin), George Dunford (Artshub), and Benjamin Laird, Clare Strahan and Jacinda Woodhead (Overland).

‘As a teaching colleague, Ania remained an enigma—guarded but uninhibited, curious but self-absorbed, mischievous but infuriating. And she was much loved. For every too-loud telephone call (often in Polish) or too-smelly can of tuna eaten at her desk, there was a fascinating conversation, a hilarious story, or a sneak peek at a usually “exceptional”, occasionally “disturbing” piece of student work. She recommended films, chased up malfunctioning air-conditioning, left cryptic messages on yellow post-it notes, and read our tarot in the cramped kitchenette. She was creativity and imagination intruding unapologetically on the routine and the procedural. A reminder, in short, of why we were there.

‘A year ago, the program’s students staged their annual Odyssey Literary Festival, drawing a significant crowd to RMIT’s Capitol Theatre. They had insisted that Ania perform. She never said no to such requests, though she might quibble and complain and worry in the lead up. She had, of course, drawn others along for the ride, two musicians, including ex-student Roman Tucker. It was a stunning finale. Ania, approaching 70, tiny, centre stage beneath that extraordinary Burley Griffin ceiling, held us spellbound.

‘She was and is unforgettable.’

A Facebook tribute group has been established: The Ania Walwicz Fan Club—”It’s been ridiculous!”