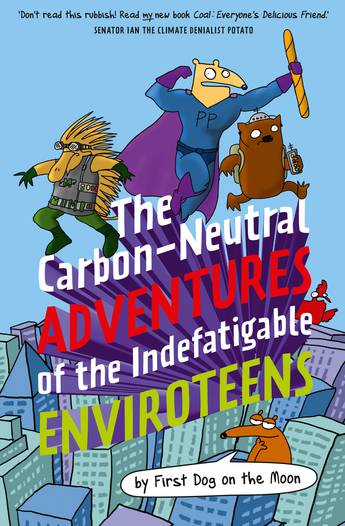 The Carbon-Neutral Adventures of the Indefatigable EnviroTeens (First Dog on the Moon, A&U)

Political cartoonist First Dog on the Moon’s debut book for children is a delightfully absurd metatextual picture book/graphic novel hybrid starring a genius wombat inventor, a superhero social media celebrity platypus who is also an echidna, and an unspecified dog-like animal with pastry-fuelled superpowers. These three friends are the EnviroTeens, a group of crime fighters who travel the world (and sometimes to the moon) thwarting the environmental crimes of giant robots and sentient clumps of microplastics. After an adventure involving an evil plastic bag, the EnviroTeens learn about the causes and consequences of climate change and set about trying to fix the problem, only to discover that they can’t do it alone and that getting others to do their part is much harder than they expected—especially when corrupt politician potatoes get involved. The manic and playful energy of First Dog’s regular one-page cartoons for the Guardian Australia newspaper is successfully carried over into this long-form story. Also carried over are their social conscience, their passion for changing the world and their frustration at both political corruption and the apathy of the general populace. This whimsical, fun book will be fully enjoyed by children who are fans of Dav Pilkey’s Dog Man books or Andy Griffiths and Terry Denton’s ‘Treehouse’ series. It is also a great way for parents to inspire conversations with their children about the complexities of contemporary environmental politics.