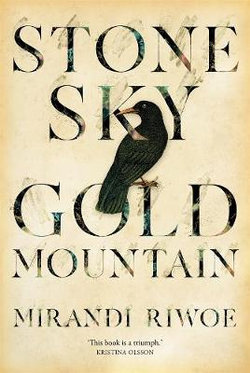 Selected from more than 185 entries and a shortlist of three announced in October, Stone Sky Gold Mountain recreates the experiences of Chinese siblings Ying and Lai Yue struggling to survive on Northern Queensland’s goldfields in 1877. Riwoe’s fellow shortlisted authors, Sienna Brown for Master of My Fate (Vintage) and Catherine Jinks for Shepherd (Text), each receive $5000.

Judging panel chair Linda Funnell said Riwoe’s skill at presenting diverse viewpoints in intricate detail made Stone Sky Gold Mountain stand out in a very strong field. ‘The historical detail is deftly woven into the narrative through the perspectives of the three characters, showing a depth of understanding of the period and its attitudes,’ said Funnell.

‘It is both intimate in its exploration of character, and epic in its depiction of the enormous social and economic movement of people and resources into Far North Queensland during the gold rush. Stone Sky Gold Mountain encompasses racism, snobbery and sexual violence, alongside moments of tenderness and connection in prose that is immediate, vivid and poignant.’

Riwoe said: ‘Historical fiction allows us as readers and writers to know more about the past, and those who weren’t written about or investigated, such as women and the working class or the culturally diverse. It can often reflect contemporary concerns and show how far we’ve come as a society, but also illuminate how far we have to go.’

The Historical Novel Society Australasia (HNSA), in partnership with ARA Group, presented the inaugural $60,000 prize via live broadcast from the official award ceremony held at the State Library of New South Wales.