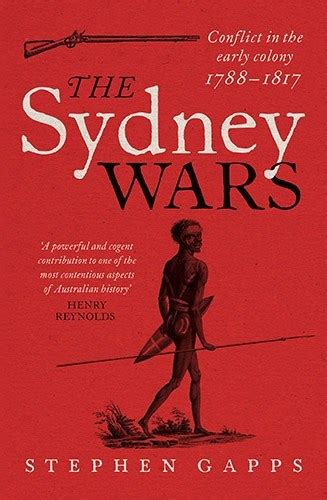 Stephen Gapps has won the inaugural Les Carlyon Literary Prize for his 2018 work The Sydney Wars: Conflict in the early colony 1788–1817 (NewSouth).

Chosen from more than 60 entries, The Sydney Wars challenges Australians ‘to think about our social and cultural heritage in new and important ways’, said Matt Anderson, director of the Australian War Memorial, which administers the award.

The judging panel, chaired by the Australian War Memorial’s head of military history Karl James, said Gapps’s book was ‘a significant work that addresses important issues, discussing the nature of Aboriginal resistance to the British, and the pattern of conflict that developed and escalated during the first three decades of the British colony in New South Wales’.

‘Dr Gapps successfully pulled together a complex topic drawing heavily on archival sources,’ said the judges. ‘The topic is an excellent contribution to Australian history that evokes considerable empathy. It tells a little-known aspect in the early colonial history of Australia, neatly confined both temporally and geographically.’

The Sydney Wars was chosen from a shortlist of four that also included Captive Anzacs: Australian POWs of the Ottomans during the First World War (Kate Ariotti, Cambridge University Press), The Year the Maps Changed (Danielle Binks, Hachette), and Two Generations: A memoir of secrets, forgiveness and my father (Anne Connor, Impact Press).

Gapps said it was ‘humbling’ to receive the award, which would be ‘wonderful assistance in my next project on the conflict in the Bathurst region in 1822–24’.

‘The Sydney Wars was four years in the writing, and it was twenty years in the thinking. I hope this award inspires other historians in their work.’