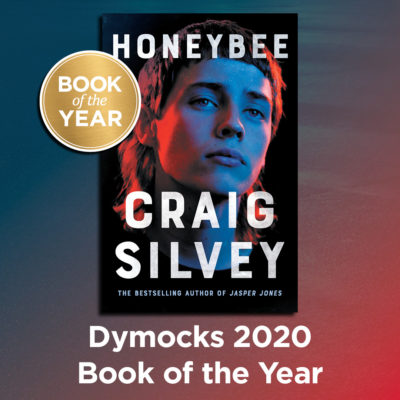 Craig Silvey’s novel Honeybee (A&U) has been named Dymocks Book of the Year for 2020.

Chosen from a shortlist of six, Silvey’s novel was voted for by Dymocks booksellers across the country, achieving 40% more votes than the runner-up.

Dymocks category manager Kate Mayor described Honeybee as ‘nothing short of a Great Australian Novel’. ‘It has unforgettable characters, a depth of emotion that plummets and soars, and a beautifully told story that will make you feel richer for having read it. Our booksellers know a true classic when they read one, and their overwhelming response to Honeybee speaks for itself.’

Mayor said the announcement ‘will not only have significant impact on Dymocks sales but also across the wider book market’. According to Dymocks, sales of the 2018 winner, Boy Swallows Universe (Trent Dalton, Fourth Estate), tripled in the week after it was announced, while last year’s winner, Where the Crawdads Sing (Delia Owens, Corsair) was at #252 in the Nielsen BookScan charts the week prior to it winning Book of the Year and by the end of January 2020 it was at number three.

Silvey said, ‘I’m thrilled and deeply honoured that Honeybee has been awarded Dymocks Book of the Year, particularly given the calibre and talent possessed by the shortlisted writers. My sincere gratitude to Dymocks Books—not only for their belief in Honeybee, but for their continued support and advocacy for Australian authors and their stories.’