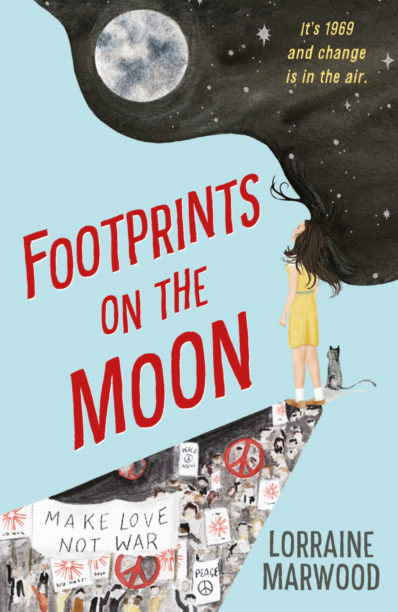 It’s 1969 and Sharnie is entering year seven and finding it difficult to make friends. The world is consumed by the Space Race and the Vietnam War, and Sharnie is feeling lost and confused as she navigates entering her teenage years, the rules of high school, growing distant from her best friend and watching her older sister Cas move away from the family. Her one constant source of comfort is her beloved grandmother, but Grandma is growing increasingly forgetful. As the moon landing grows closer, Cas begins to date a returned soldier. Touched by his experiences in Vietnam, Cas stages protests, angering her parents and causing tension within the family. Wanting to remain loyal to her parents but concerned by all she is learning about the war, Sharnie must find the courage to discover her own place in this rapidly changing society. This is a lovely and very accessible verse novel depicting an Australia consumed by generational conflict that played out at dinner tables around the country. Set during a time of rapid social upheaval, it is a gentle introduction to the protests surrounding the Vietnam War and provides scope for much discussion around the era. Marwood explores themes such as grief, adolescence and family tensions with sensitivity and emotion, and Sharnie’s feelings of loss and confusion will be familiar to many readers. This novel is a beautiful slice of Australian life for middle readers who enjoyed Meg McKinlay’s Catch a Falling Star and Danielle Binks’s The Year the Maps Changed.

Erin Wamala has worked in publishing and bookselling, and is now a teacher librarian and an older readers judge for the 2020 CBCA Awards.