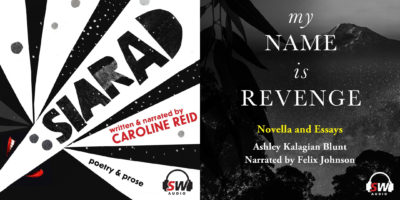 Spineless Wonders has launched its new audio production stream with the release of two audiobooks, My Name Is Revenge by Ashleigh Kalagian Blunt and Siarad by Caroline Reid.

Siarad, named after the Welsh word meaning ‘to speak’, is a collection of short fiction and poems about life, death, ageing and love. For the audiobook, Reid’s narrations are accompanied by soundscapes designed and produced by emerging composer Jeffrey Zhang.

My Name Is Revenge, which was runner-up in the 2018 Carmel Bird Digital Literary Award, is a literary thriller set in 1980s Sydney and drawn from true events, including a series of international terrorist attacks. The audiobook is narrated by Sydney-based actor Felix Johnson and directed by theatre-maker Eleni Schumacher. Schumacher has also narrated one of the stories from this year’s Carmel Bird Digital Literary Award winning short story collection, Michalia Arathimos’s Apologia, which will be broadcast on Spineless Wonders’ radio program Little Fictions in early 2021.

‘Spineless Wonders has a solid track record of collaborating with authors, performers, directors and composers to produce live and pre-recorded performed fiction,’ said publisher Bronwyn Mehan, referring also to previously produced CDs of author-narrated short story collections, which were sold only at live events and from the publisher’s website.

‘It is a natural development for us to produce audiobooks and audio-dramas which focus on immersive listener experiences and high production values when it comes to professional narration and sound design.’

Mehan told Books+Publishing that distribution to major audiobook platforms is via audiobook distributor Findaway, and that physical copies will be available ‘where there is demand’, including at the live performance by Reid and Zhang of Siarad at the 2021 Adelaide Fringe Festival.

Submissions for the 2021 Carmel Bird Digital Literary Award, which as of next year offers the winning author an audio production agreement, close on 7 February 2021. For more information see the Spineless Wonders website.