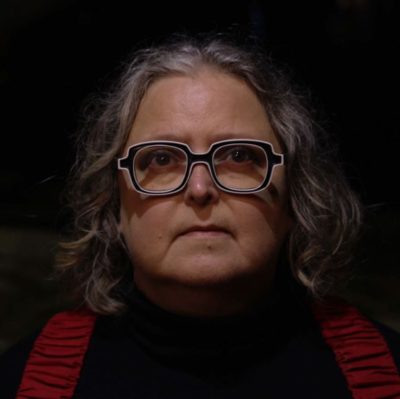 Krissy Kneen on ‘The Three Burials of Lotty Kneen’

In Krissy Kneen’s new memoir The Three Burials of Lotty Kneen (Text, May), the death of her beloved grandmother is the catalyst for the excavation of long-buried family history, taking Kneen—and the reader—on a page-turning journey of discovery from Central Queensland to Slovenia to Egypt. Reviewer Megan O’Brien spoke with the author.

The Three Burials of Lotty Kneen incorporates poetry, travelogue, recipes and fables alongside a compelling investigation into identity and belonging. The joy sits alongside the tragedy in equal measure and intensity. How did you approach the writing of this book?

This book felt like a collage process. I wasn’t really sure what I would find when I set out to investigate my family history. I didn’t know if I would find anything concrete at all. I thought I might have to go inside my own body, into my physical, emotional and psychological traits. I wanted to know if this body I am in would give me some clues into my cultural background. Because of this I had to keep disparate bits of information: memories of foods my grandmother cooked, trying to match them to traditional dishes; fairytales she told me that might have a regional history; food allergies; body shape; my fizzy hair; small glimpses of memory she let slip. All these little fragments might be parts of the larger puzzle. I couldn’t throw any clue away.

I started to knit it all together. It really felt like collage. Eventually I dug up some historical gold so the book became more about the history but the other aspects of knowledge were still very much in my mind. Women’s knowledge is traditionally passed down through story and through recipes. These fragments turned out to be really useful too as my grandmother’s cooking did not match the food of Slovenia, which was a really clear sign that she learned to cook somewhere else.

There are some pretty startling discoveries along the way, including your connection to the Aleksandrinke women of Slovenia. Did you ever feel like following the secrets in your genes was like opening a Pandora’s box?

Finding out about the Aleksandrinke was like a giant crack opening in the floor.  When I found out about them, I started to see that this was a secret that the whole country had been keeping. I talked to an old man in my grandmother’s village about the Aleksandrinke and he started to cry, telling me that this period was so sad and so shameful. So many people were hiding their pain that related to this period.

In that part of Slovenia 40% of the women were forced to work in Alexandria in Egypt or their families would starve. This meant there were many, many children left behind without their mothers and sisters, even tiny babies were brought up by relatives. There is still a really big story to tell about that period as the wounds are still deep and the generations after this are still scarred by being brought up without mothers. It seems that the project of remembering these women has been a passion for the granddaughters of the Aleksandrinke.

I met so many granddaughters who were trying to reclaim this history, to remember their grandmothers and to celebrate them as the true heroes of their communities. I think for the daughters and sons it was just too raw and painful but the grandchildren are a little removed from that pain and in particular the granddaughters can see how it was women who kept the communities alive. These women were accidental feminists and the granddaughters gain power from this knowledge.

The kindness of strangers played a large part in peeling back the layers of your family history. Were you surprised by how much you were aided by serendipitous encounters?

If I were a superstitious person, I would think I had been helped by universal forces. At every turn there was a coincidence which helped me along the way. Having a best friend who turned out to be Slovenian and who went to live there and learn the language was just the start. Beejay, the writer who read my book and contacted me from her first week living in Egypt, really changed my mind about travelling to Egypt to find out more of the story. Beejay has now become one of my closest friends. Then stumbling upon relatives in both Slovenia and, particularly, in Egypt was a crazy coincidence. People have been so generous with their time and knowledge. I was incredibly humbled by the experience.

Lotty Kneen, your grandmother, was also a storyteller. How much did she influence you as a writer?

I am certain that her unshakable belief in art and her habit of constantly reading influenced my path. I never wanted to be anything other than a writer. I never really considered another path and I think that was because I saw my grandmother stand by her artform and throw herself into it with all the passion she had. I know other people, my partner included, who didn’t have that kind of support to become an artist. In Australia it isn’t really a job that regular people see for themselves. I am eternally grateful for her creativity and her unusual way of seeing the world that has filtered down to me.

The beautiful jacket for the book features a paper house. Can you tell us about it?

I had always seen the jacket for the book as some kind of paper-art image. I sent my publisher a bunch of book sculptures that featured wild woods and fairytales hoping that they would agree to go with this kind of image. I think it is important to know that this is a book made out of so many different stories, other people’s stories and fairytales and myths.

I read a huge number of books—fiction, poetry and nonfiction—in the hope of finding my way into this book. I wanted to picture this, like red-riding hood lost in a forest of books trying to find her grandmother’s house. I was so happy with the final image that Imogen Stubbs came up with. The artist, Justin Rowe, does exactly the kind of work that I was imagining. The little light in the house so clearly represents the Baba Yaga’s secrets hidden in the woods.

The Mermaid of Black Conch by Monique Roffey (Peepal Tree Press) was the latest gem I devoured. Such a magical book but filled with so much sadness. Before that the book that has stuck with me most has been The Animals in that Country by Laura Jean McKay (Scribe). That book changed the way I thought about animals and about language and about writing. I have a little note above my desk with the words ‘dead sky meat’ which was how the dingo Sue referred to rain, and thinking about how rain is seen through an animal’s eyes it made so much sense. Something that sustains life, like meat, but it is the meat of the sky and it is dead because it has fallen. I really loved that book and it will stay with me for a long time.