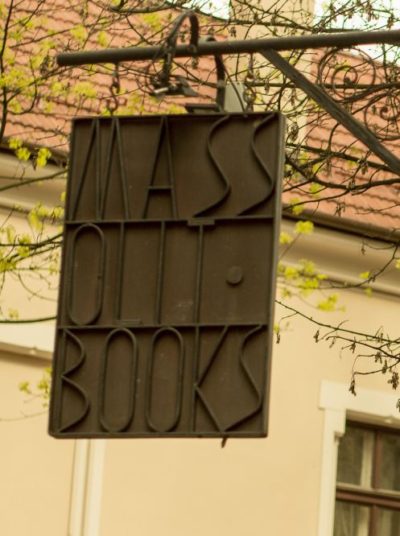 ‘Massolit is outright leader of the shortlist of must-go places when you visit Kraków as a foreigner,’ says Kraków UNESCO City of Literature’s Elżbieta Foltyniak. ‘A bunch of excellent books, friendly booksellers, delicious coffee and the unique cozy atmosphere—sounds like a perfect bookstore, doesn’t it?’

Massolit Books in Kraków was founded in 2001 and, as explained by Robert Kluczkiewicz it is a ‘flat organisation’. This is why, even though he has worked in the store for almost 10 years, he doesn’t have an official title. ‘The organisation has no managers per se and is run by passionately committed employees.’

The store stocks both new and second-hand books, all in English. ‘The idea was to open an English-language independent bookstore/infoshop to promote progressive ideas among both locals and foreigners living in Poland,’ says Kluczkiewicz. ‘Our focus is not so much the bestseller list, but rather a curated selection of less-known but nonetheless important books from all fields of interest.’

Titles range from classic to contemporary literature and there is a large section of translated Polish works, as well as nonfiction, children’s books and art albums. ‘I think I wouldn’t be overreaching if I said Massolit Books is the largest English-language bookshop east of Paris,’ he says, estimating that the store has more than 10,000 books currently in stock.

‘We specialise in Jewish Studies, East and Central European literature and history, and humanities nonfiction. Massolit Books has always had strong leftist leanings (as is the case with most independent bookshops, frankly speaking), and our love of the Verso Books catalog is reflected on the bookshelves.’

The store is located in the city centre, though, as Kluczkiewicz explains, it is slightly off the beaten tourist track. ‘It occupies two large apartments on the ground floor of a 19th-century tenement, divided into two parts: the cafe side, with all our fiction books and two rooms with coffee tables, and the bookstore side—three spacious rooms filled with nonfiction books. Patrons can drink and eat in both sections, although the latter is much more book-oriented.’

In its 20-year history, the store has stayed in the same spot. ‘It is rather unusual for a bookstore in Poland to operate continuously in the same location for more than ten years, so I’d say it’s no small feat that we have managed to stay in business for all these years,’ says Kluczkiewicz. In 2010 a branch of Massolit Books opened in Budapest, and though it is no longer owned by the same people as the original Kraków store the two branches still cooperate. Then in 2014 Massolit Bakery, which specialises in American-style patries, opened around the corner from the bookshop. ‘There’s also Massolit Books 2, a Polish-language bookstore and cafe located in Kazimierz (the Jewish district), and Massolit Bakes, another bakery and baked-goods shop.’

Community is a vital element of Massolit Books. Kluczkiewicz explains how pre-pandemic they would host at least one literary event a week, whether that be poetry readings, book clubs or writing workshops, held in both English and/or Polish. They also published WIDMA, a Polish-American journal of contemporary poetry.

‘This place serves not only as a bookstore but also as an informal centre for expats living in Kraków and a cultural centre for locals,’ says Foltyniak. ‘It’s a fantastic melting point for cultures, languages, and perspectives, a bridge between communities: local and international ones. Even in the pandemic, the bookstore’s program was packed with meetings and discussions, so the readers could enjoy the Massolit atmosphere—online and offline.’

Asked what customers have said they like about Massolit, Kluczkiewicz replies: ‘They always say they love the atmosphere of “an old bookshop”, with its smell of old books, the wood shelves stacked floor-to-ceiling, our nooks and crannies, the comfortable sofas on which you can curl up with a cup of coffee while reading a book. I’d like to say our customers appreciate the customer service we offer, but it’s not for me to be the judge of that.’

On what his own favourite aspect of the store is, Kluczkiewicz says, ‘I love the non-hierarchical structure of our organisation and its politically conscious attitude, something that fits nicely with Hakim Bey’s definition of a (Not So-)Temporary Autonomous Zone. Also, as a book lover, I’m really glad there’s a bookstore like ours in my town.’