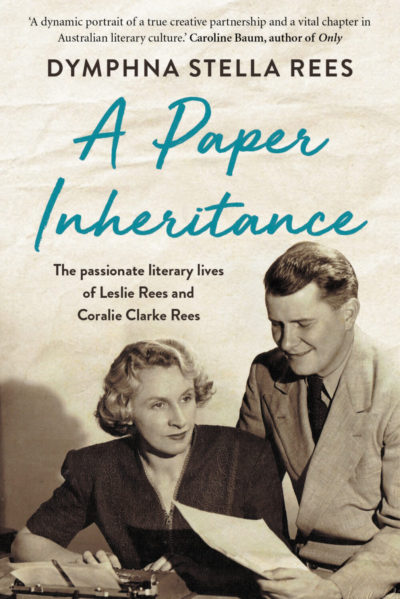 Leslie Rees and Coralie Clarke Rees were a literary partnership, contemporaneous with two more famous Australian literary couples of the 20th century, Ruth Park and D’Arcy Niland, and Charmian Clift and George Johnston. The Reeses were also friends with Miles Franklin and Dymphna Cusack, whose first names they bestowed on the younger of their two daughters, Dymphna Stella Rees. Judging from Rees’s carefully compiled and beautifully written account of the lives of her multi-talented parents, this literary bequest, along with the mountains of paperwork left to her upon her parents’ deaths, has been both a blessing and a curse. But mainly a blessing. There is a lot of love in this memoir—and a lot to love. Much is directly quoted from original sources and Les and Coral’s early letters especially—penned on the high seas as Les departs for the UK on his graduate student scholarship leaving behind his beloved Coral—are gold. The Reeses eschewed financial enrichment, instead choosing to seek literary engagement with the world. They eked out successful freelance careers in Depression-era postwar London before returning to their homeland to raise their family and continue their diverse literary interests, which included radio plays, bestselling children’s books and travel literature. In her honest and artful tribute, Rees has given Coralie Clarke Rees and Leslie Rees their rightful place in the history of Australian letters and provided lovers of the same a rich and engaging read.