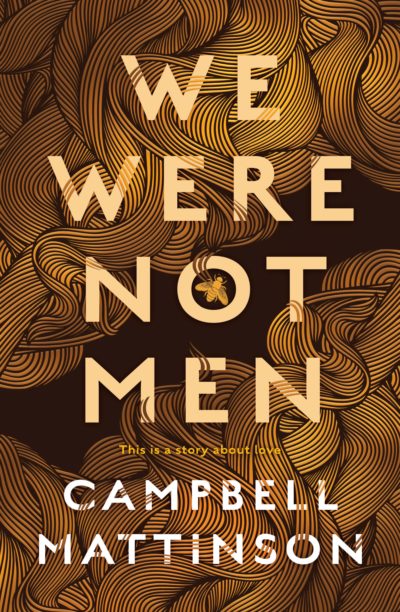 We Were Not Men (Campbell Mattinson, Fourth Estate)

Campbell Mattinson’s We Were Not Men charts the story of twin brothers Jon and Eden in an episodic exploration of male kinship. Told from Jon’s perspective, the book begins with the pair’s difficult childhood as, aged nine, they are confronted with the traumatic death of their parents. Soon, each twin embarks on an endless pursuit to heal and find themselves through swimming. They leave their foundations of the family farm and its neighbouring creeks for the suburbs of Melbourne, retaining a connection to water by keeping Port Phillip Bay in their sights. For Jon, Eden is a constant reminder of family and the past, and also a trigger for intense emotions: ‘My brother. Suddenly I wanted to hug and hit him at once.’ Jon’s early school years are preoccupied with teen romance—the twins compete for same girl—against the backdrop of obsessive swimming practice and competitions, and later even attempts to reach the Olympic Games. Mattinson takes advantage of a vignette style throughout, with the narrative structured as short, episodic moments that are strong and regulated, almost as if the reader is encouraged to break and come up for breath. The writing is sparse, unashamedly intimate and laced with pensive pauses, an approach that excels at conveying Jon’s fraught interior life. We Were Not Men is an affecting story of brothers who bond over shared loss and forge their identities swimming against the tide.

Nathan Smith is a freelance writer based in Melbourne.