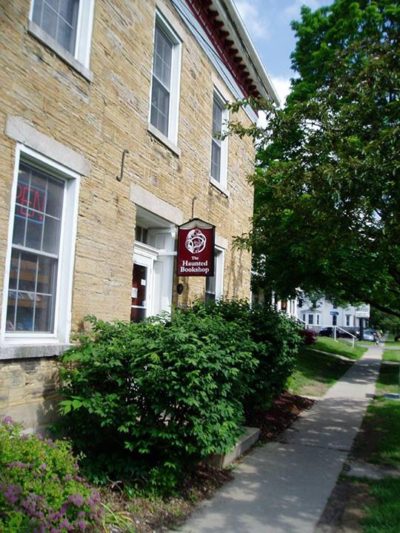 In Iowa City, there’s a house that’s been standing since 1847 which is now home to 50,000 used, rare and out of print books, three cats, and an enviable collection of games.

This is The Haunted Bookshop, which has been running since 1978, having moved through two rented locations before finally settling into its current home in the historic Wentz House.

Current owner Nialle Sylvan has lovingly curated a diverse and ever-changing collection, which she explains ranges ‘from children’s picture books to scholarly texts in history, local interest to art theory, literary fiction in translation to cognitive science. This reflects the diverse interests of this university town, though the section that probably gets the most attention is poetry, with over 1000 titles in stock.’

The store doesn’t have a particular specialist focus, though Sylvan is partial to literary fiction—of which the store has 8000 titles—as well as science fiction, children’s books, and classical and medieval studies.

‘All my books come from Iowans, who bring me their books to buy or let me come and purchase their libraries. It’s about 35,000 volumes per year, so I chuckle a little when people ask where the “new arrivals” are,’ says Sylvan.

Like most bookstores, they get their fair share of strange requests. ‘One patron wanted a large number of flying pig finger puppets (yes, we have them) to decorate her husband’s grave,’ Sylvan shares. More recently, they had someone come in to request ‘$50 worth of books specifically involving water (fiction or non) for a preteen’.

‘The Haunted Bookshop is known and loved for their attentiveness to the shop’s visitors and has continued to uphold their reputation during the past year,’ says Iowa City UNESCO City of Literature’s Brooke Sarrazin. ‘While the shop has remained closed, the staff is dedicated to getting books into the hands of readers. They have provided spot-on surprise selections to readers based on various personality traits and interests.’

It’s not just a place for a quick browse—it’s also a popular place to study, to spend time with the resident rescue cats, for dates—and, Sylvan explains, proposals. She can count 14 that have happened in the store just off the top of her head; though, the only reception hosted it has hosted so far has been her own.

‘Visitors to the store can look forward to cozy reading spots in each room, spontaneous piano performances by patrons, and perhaps one of their store cats will grace you with their company while you’re browsing!’ says Sarrazin.

They’re also very committed to their community, running fundraisers for the Free Medical Clinic, donating materials to local schools, offering employment to people with disabilities, and supporting literacy programs ‘from donating books to teaching the odd informal class on Shakespeare’.

There are no ghosts in The Haunted Bookshop—well, probably not. The name comes from a novel by American writer Christopher Morley. ‘I usually tell people that when you cram this many books by this many authors, each book owned by at least one reader before, in a house with this much history, you’re bound to feel a sense of presence here,’ says Sylvan. ‘The simpler truth, however, is that we have three cats living here right now … but dozens of people have described a fourth, quite long-haired and either all white or all black, that I have neither seen nor fed. Fortunately he’s never given us any trouble other than confusing the patrons!’

Asked what her favourite aspect of The Haunted Bookshop is, Sylvan replies, ‘I’m in it for the good company. Iowa City is packed full of readers with wide ranges of interests. The best days are the ones on which I meet new readers and books or start someone on a new author or subject. I’m also very curious, and meeting scholars and experts of all stripes allows me to continue studying… well, everything.’