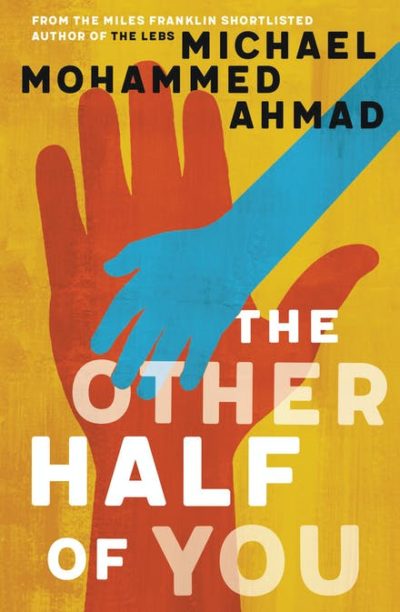 The Other Half of You (Michael Mohammed Ahmad, Hachette)

Michael Mohammed Ahmad’s latest novel continues the story of Bani Adam, a young Lebanese Muslim man growing up in Sydney. Bani, the protagonist of Ahmad’s 2018 novel The Lebs, now has a university degree behind him, as well as a relationship with a woman that he was forced to abandon due to family pressure. He struggles to find a place where he fits in—too educated and left-wing to be comfortable around his religiously conservative family, too Muslim to be comfortable in xenophobic white Australian society. Written as a stream-of-consciousness letter to his son, The Other Half of You recounts Bani’s journey as he leaves behind a girl he loves and marries one he doesn’t at his family’s behest, trying to live a life he never wanted without cracking under the pressure of familial and social expectations. Bani is an erudite, nihilistic observer. He trains a hard gaze at people’s hypocrisies and selfishness, including his own. He is as scathing and despairing of gender roles in his family as he is of the racism of white Australians. He saves the hardest gaze for himself, contemptuous of his inability to choose between desire and expectation, and equally contemptuous of the consequences of his choice not to shoulder those expectations anymore. Bani’s voice is urgent, cynical and darkly comical at the same time as being replete with faith and optimism. He leavens his story with quotes from the Arabic and European canons, interspersing his literary references with devastatingly accurate descriptions of the detritus of contemporary urban society. This book will be of interest to readers who enjoyed Ahmad’s previous novels The Tribe and The Lebs, anyone with an interest in the social construct of race in Australia, or simply those who enjoy an intelligently told, relevant and contemporary literary love story.