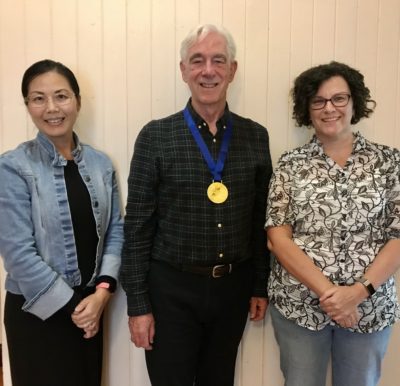 The Institute of Professional Editors (IPEd) has announced Edwin (Ted) Briggs as the recipient of the second annual Janet Mackenzie Medal.

The award, which honours the late founding member of Editors Victoria and lifetime IPEd member Janet Mackenzie, is for ‘an outstanding professional editor who has lifted the standard of the editing profession and/or given exemplary service to IPEd’.

Briggs’s professional career as an editor and technical writer, both in-house and freelance, has spanned several federal government departments. More recently, he has worked as a fiction beta reader and led IPEd’s review team for the digital version of the Style Manual, produced by the Federal Government’s Digital Transformation Agency.

A former chair and current member of IPEd’s accreditation board, Briggs served on what is now the IPEd board from 2009 to 2011 and is an honorary life member of IPEd and the Canberra Society of Editors. According to IPEd, Briggs ‘made significant contributions to the development of Australian standards for editing practice and played a key role in developing what is now the IPEd Mentoring Program’.

‘He has promoted better English usage through engaging enthusiastically with professional development by participating in a wide range of workshops and courses; presenting papers at IPEd conferences; training non-editors on written communication skills in workplace courses and workshops; and publishing blog posts on aspects of grammar and usage for a general audience.’

The medal was presented by IPEd CEO Karen Lee and chair Ruth Davies. Briggs said it was ‘a big honour to be mentioned in the same breath as Janet Mackenzie’ and that Mackenzie taught him that ‘the editor’s role was like a prism in a telescope—it was not to change the view but to bring it into focus more clearly and closer’.