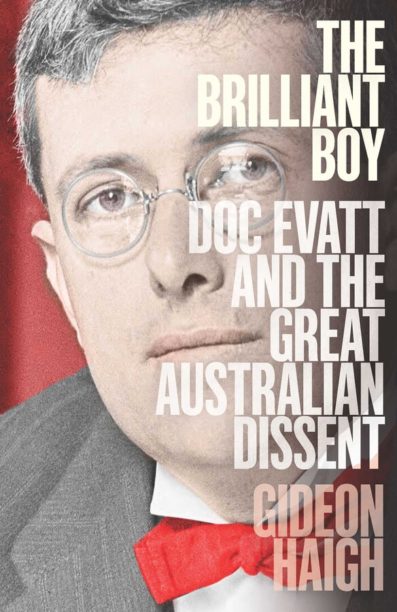 If Herbert Vere ‘Doc’ Evatt is thought of at all today, it’s usually in terms of his nearly decade-long failure as Labor leader to combat Menzies’ conservative stranglehold. Gideon Haigh has largely excised these years from this partial history and instead, with his matchless instinct for a great story, frames Evatt’s life against that of a case he was involved in as a High Court judge, the accidental death of nine-year-old Maxie Chester. In this way, Haigh gives shape to Evatt’s polymathic life while exposing some egregious aspects of Australia’s recent history. It’s hard to believe now, but in the 1930s water-filled trenches could be dug in suburban streets and then left for young children to drown in—and the chief justice of the High Court could claim the sudden death of a child produces no ‘consequence of more than a temporary nature’ in the heartbroken parent. Evatt, a highly empathetic man, fought back in his legal judgements against the general callousness of the day, helping set the scene for progressive governments to come and the more humane society in which we live today. Haigh’s carefully researched and highly detailed history paints a picture of a loving husband, a devoted father and an idiosyncratic genius. Evatt lived well but, neither an investor nor a saver, he wasn’t driven by personal financial aggrandisement and, as the youngest ever judge in the High Court, he turned his back on a pension by retiring. Haigh also brings into clear focus the hidden heroes with whom Evatt closely worked, such as politician Abram Landa—and there’s much else besides. Anyone with an interest in Australian history and the law will find a great deal to engage with here.