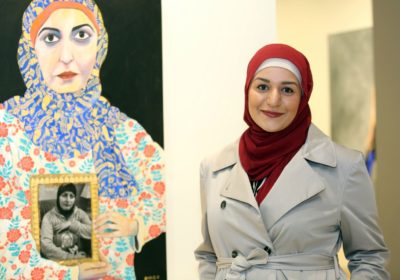 Amani Haydar on ‘The Mother Wound’

Artist, writer and lawyer Amani Haydar’s father murdered her mother in 2015, while Haydar was pregnant with her first child. The Mother Wound (Macmillan, July), Haydar’s debut memoir, is an intimate work about family, grief, art and gender, which reviewer Eda Gunaydin says is a clear-eyed and complex depiction of intergenerational trauma, state violence and violence against women. She spoke to the author.

You use this book to highlight some of the policy failures that compounded the trauma of the loss of your mother: for example, issues accessing social security payments and issues around coercive control, the latter of which is currently a very live topic. What type of impact do you hope that your book has on the conversation and policies about domestic violence in this country?

I really hope that the book adds to the conversation by highlighting some of the structural issues that fail victims and make it harder for women to leave abuse. The conversations we have about preventing and responding to violence need to be intersectional and nuanced; accounting for the various factors that add complexity to women’s lives. My experiences are an example of why policy needs to respond to this complexity rather than offering a one-size-fits-all response.

You’re a multidisciplinary artist—you paint, weave and write (alongside practicing law!). Why do you practice across so many different media? Is there one that you feel comes the most naturally to you?

I’ve reluctantly taken a break from legal practice although I remain curious about and interested in how the law shapes and responds to social issues. I’ve always felt that art comes most naturally to me but lately I’ve wondered whether that’s because it allows some room for symbolism and ambiguity making it ‘safer’ at times than writing things out in black and white. When I think about keeping a diary as a child, loving books and writing from a young age, I realise that I have always felt at home as a writer. I’m further along in my art journey so it was very reassuring when, having read a draft of my manuscript, Randa Abdel-Fattah responded saying ‘you are a writer first’. I think justice, art, and writing will always be a part of my work now and they’ve come together as one in this book.

You unpack the concept of the ‘mother wound’ as a psychological phenomenon at various places throughout the book, both when you discuss your relationship with your children and how it has been shaped by the death of your mother, and when you discuss your relationship with your own mother. What drew you to this concept and what does healing the mother wound look like to you?

I came across the concept of the ‘mother wound’ while I was working on an art exhibition in 2019. There are so many self-help resources and so much popular psychology information available online but I was drawn to this particular idea because it seemed to reflect the sense of intergenerational loss I feel in my life; loss of connection, knowledge, heritage etc. I wanted to play with the concept in my writing, broadening the idea so that it captures wounds and fractures in interpersonal relationships, politically and globally. I like to think of these wounds as something that can be repaired, and that evokes a sense of hope rather than helplessness. For me, healing the mother wound means reclaiming, restoring and valuing the things that I have inherited matrilineally so that they are able to be passed on to the next generation.

I thought The Mother Wound did an adept and smart job of dismantling some of the common tropes you hear about Middle Eastern men and violence—namely that it has a cultural or religious origin. You note how hard it can be to call out misogyny inside one’s own community when there is this pall of people’s possible racist interpretations hanging over the subject. What role does your feminism play in navigating this terrain?

For me feminism means recognising and working against oppression through a lens that recognises the role of gender roles and expectations in the way people experience the world. What I bring to my work—be it my art, writing, activism, or leadership roles—are the things I’ve learned as a victim of crime, as a child of migrant settlers, as a Muslim woman who was born and raised in Australia. This experiential data is so valuable and works both ways; it helps inform and educate communities about the harms of gender-based stereotypes and violence while informing and educating feminist spaces about how to do things in a more culturally sensitive way, focusing on the empowerment of women rather than the erasure of their cultural or religious identities.

This book is a loving tribute to your late mother and grandmother, and I admired the way you structured the book so that their stories came together and spoke to each other. What made you feel that these two stories needed to be told side by side?

Firstly, my mum experienced both stories within her life so, in setting out to capture her story, it would have been remiss of me to leave out this huge grief. The more I wrote, the more important the link seemed. There are examples in the book of my dad leveraging this pain and using it to upset and gaslight her. Abuse happens within context, and displacement, migration and war trauma are a huge part of our context.

I think the story came together for me in the days after the murder. In the book I describe seeing my mum’s death being reported with reference to the photos taken at the time of my grandmother’s death and realising that their stories existed on a continuum of violence. While the trauma of domestic violence has long been compared to the trauma of war, the parallels aren’t always apparent in mainstream conversations. I remember feeling that I was experiencing both deaths at the same time. That feeling has stayed with me and shapes so much of my storytelling; I think it’s incredibly powerful because it connected the dots between the personal and the political and the immense sense of injustice that women like mum have carried. My hope is that it connects the dots for readers too.

I’m currently reading Racism: Stories on fear, hate & bigotry (ed by Winnie Dunn), which is the latest anthology from Sweatshop Western Sydney (and in which I have a short piece). I am loving it because I find immense joy in engaging with stories that reflect the true diversity of our society and challenge me to continue learning about anti-racism not just as something theoretical, but as a practice.