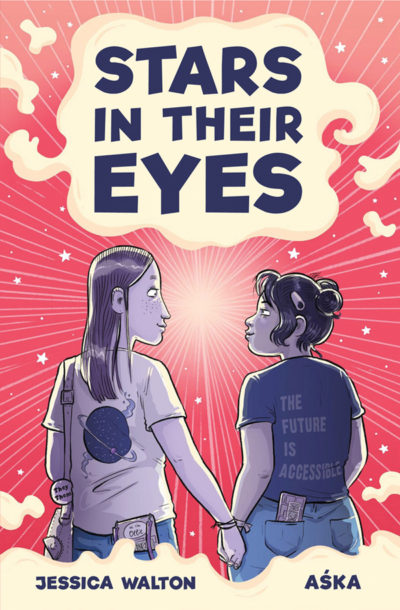 Keeping it real: The latest YA Own Voices titles from Australian publishers

As the Own Voices movement gains momentum around the world, Australian publishers have been filling their YA lists with diverse and exciting Own Voices titles.

In 2018 Fremantle Press published Meet Me at the Intersection, a YA anthology of short fiction, memoir and poetry by authors who are First Nations, people of colour, LGBTIQA+ or living with disability. One of the submissions—Jessica Walton’s short story about first love, set at a fantasy fiction convention and featuring disabled, queer characters—will soon be published as a graphic novel in collaboration with illustrator Aśka. Stars in Their Eyes (October 2021) shows its central character, Maisie, dealing with a disability and with chronic pain and anxiety. However, ‘it’s the relationships between the characters and the joy of finding people you connect with that are the real focus of the book’, says Fremantle Press CEO Jane Fraser.

Fraser sees value in the graphic novel form for its ability to show rather than tell at times. ‘We believe the form helps prevent the story from becoming didactic,’ she says. ‘There are a lot of layers and details in Stars in Their Eyes that are shown through the illustrations and this helps the momentum of the narrative. The details are there, they’re just not all explained in words. Sometimes showing rather than telling is powerful.’

Stars in Their Eyes is just one of several exciting new YA Own Voices novels currently being published in Australia—with international interest growing.

One of the lead titles on Allen & Unwin’s list is a queer Indigenous YA Own Voices love story. The Boy from the Mish by debut author Gary Lonesborough follows 17-year-old Jackson over a hot summer on the Mish (a former mission) and his relationship with the mysterious newcomer Tomas, and explores themes such as first love, identity and the power of self-belief. North American rights have already been sold to Scholastic. (‘It awed me with the power of its storytelling,’ said Scholastic editor and author David Levithan of the acquisition.)

Hardie Grant Children’s Books’ YA novel Tim Te Maro and the Subterranean Heartsick Blues by New Zealand author H S Valley (August 2021) has also attracted ‘an incredible amount of international interest’, reports the publisher. Pitched as a ‘very funny, very sexy Own Voices LGBTQ YA novel’, the story is set in a magical boarding school beneath a glacier in New Zealand, where Tim Te Maro and his nemesis, Elliott Parker, team up to do their school’s egg-baby assignment as a way to get back at their exes—only to fall for each other. ‘It’s an utterly captivating and uplifting novel, full of lust, love and laughs—and wonder-filled, swoon-worthy moments,’ says rights executive Madeleine Manifold.

As well as being home to the world’s oldest continuing living cultures in diverse Aboriginal and Torres Strait Islander cultures, Australia is also known for its diverse immigrant population, with one in four Australians born overseas. Two new YA Own Voices novels put Muslim Australian cultures in the spotlight.

The F Team by Rawah Arja (2020) tells the story of a group of Lebanese boys who participate in an interschool football tournament to try to save their Western Sydney school from being shut down. It’s published by Giramondo, a small press that has championed a number of talented writers from multicultural Western Sydney.

Giramondo commissioning editor Nick Tapper believes the novel has the potential to work well with international readers. ‘While in essence the book’s very local, set in Punchbowl and its Western Sydney surrounds, and centred on rugby league—the themes it explores, masculine anger and overcoming prejudice, as well as the warmth and humour of Rawah’s voice, will be unmistakeable wherever it’s read,’ says Tapper.

Published by Wakefield Press, Sunburnt Veils by Sara Haghdoosti (2021) is pitched as a ‘smart, funny, character-based exploration of Islamophobia’, with an opposites-attract romantic subplot. It tells the story of Tara, a Hijab-wearing med student who joins her university’s union after her backpack is called in as a bomb threat by a fellow student.

Do Own Voices stories travel?

Australia’s leading Indigenous publisher Magabala Books has been publishing Own Voices stories—from picture books through to adult titles—for over 30 years, and has seen a growing interest from international publishers in recent years. ‘Magabala is in a great position at the moment, as is Australian publishing in general, as local, national and international readers are wanting a broader range of diverse voices or experiences,’ says publisher Rachel Bin Salleh. Magabala’s current list includes the award-winning verse novel for younger readers Bindi by Kirli Saunders (illus by Dub Leffler).

However, Bin Salleh acknowledges that it has been difficult in the past to get international exposure for the publisher’s titles. ‘What we have found, even in the past with our small rights sales, is that it has to suit the right publishing house, and even though it may be culturally specific, it must have principles in common with many cultures and a universal message,’ she says.

Fraser also notes that while there is a ‘huge interest’ in Own Voices stories in Australia, with strong local sales for Fremantle Press titles such as Sally Morgan’s Sister Heart and Holden Sheppard’s Invisible Boys, most international publishers are ‘focused on Own Voices stories from their own regions and writers at this stage’. ‘However,’ she says, ‘Stars in Their Eyes has garnered keen interest from multiple international publishers, so watch this space.’