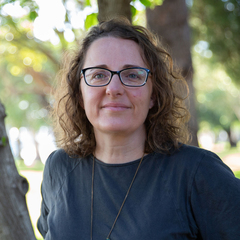 Zoe Deleuil on ‘The Night Village’

In Zoe Deleuil’s debut novel The Night Village (Fremantle Press, August), a brief relationship and an unexpected pregnancy see Australian expat Simone suddenly living with a new baby in her boyfriend Paul’s London apartment in the Barbican Estate. Feeling overwhelmed by motherhood and unsettled by Paul’s cousin Rachel, who has come to stay, Simone starts to feel the walls closing in around her. Reviewer Fiona Hardy said The Night Village is an ‘exceptional psychological thriller … wedged so firmly in reality that the cold London air and the tension of life with a newborn seem palpable’. She spoke to the author.

Reading Simone’s experience of childbirth and new parenthood is so visceral, so real, that I honestly thought I was back in those same overwhelming hours of early motherhood. How were you able to write these moments with such vividness and clarity?

Having two babies of my own gave me a lot of raw material, but it was writers such as Liz Berry, Rachel Cusk, Alice Pung and more that convinced me it could be made into fiction. As I wrote, details of that time came back to me, and there was something so satisfying about getting those fleeting moments, such as bathing a newborn, onto the page. The whole baby-and-toddler phase was such a blur that I barely had time to blink before it was over, and writing The Night Village allowed me to relive it while creating something new.

Setting this claustrophobic story in a high-rise apartment added a frisson of tension to the tale—that feeling of no fresh air and too many people in one space—causing both Simone and the reader to never truly relax. Did you begin with characters living in an apartment, or did that come to you after time?

Early on in the writing process I moved my characters to that apartment because I thought it had more dramatic potential than a typical London flat. I always had mixed feelings about the Barbican Estate—it’s an architectural icon, but also bleak and difficult to navigate and oddly soulless, and I knew that particular atmosphere would work for the story I wanted to tell. I have never been there with a baby, but it was easy to imagine how claustrophobic and lonely it would feel.

I marvelled at your craft at creating moments that were so ambiguous that I never truly felt confident about what was happening until the book’s final pages. Can you tell us how you worked to keep that atmosphere?

I think it’s often about what you’re keeping off the page, and that comes from tweaking the sentences until you’re hopefully giving the reader enough information to stay with the story, but not so much that they know exactly what’s going on. The editing process also helped—when the manuscript landed back on my desk I’d have fresh eyes and tactful suggestions about where I might dial down or ramp up the drama. I do feel like I got lucky with this book, though—somehow the characters and the setting gave me plenty to work with but never felt unwieldy.

The standout character is Simone, who makes mostly rational decisions in the face of irrational circumstances—a bewildering new baby, a boyfriend she doesn’t know well enough, a houseguest with unclear motives. How did your protagonist take shape for you?

One thing I remember so clearly about having a newborn was a sudden awareness of danger all around me, from open windows to germs to falling asleep, along with a rising panic when I was away from my baby for too long. That protective instinct is universal and keeps babies safe, but it can be exhausting until you learn to live with it.

I often wondered what it would be like to be in that state while living in a genuinely precarious situation, and that gave me the spark for the story. Simone has to work out what—if anything—is truly threatening and what is simply her ‘noisy brain,’ as she puts it. My editor at Fremantle Press, Georgia Richter, made an observation early on that Simone was ‘honing her instincts,’ which immediately made sense to me and guided my writing of her character.

Did the pandemic see any changes to your normal writing process? Many authors (and readers) also struggled to read during lockdowns and uncertainty, despite the forced time at home—have you found that to be true?

I’m currently in Germany, so I’ve had less time to write as my kids have been at home so much, but that isn’t a bad thing as it forces me to be efficient. Like many people, reading has been a lifeline for me, and I listened to book podcasts, re-read many of my favourite books and even ordered a stack of YA mystery novels by Lois Duncan when I really wanted to get away. The main thing I’ve noticed with writing is that I’m avoiding the present. If I catch a character putting on a mask or mentioning lockdown I delete all evidence and move the story 20 years into the past or future. My guess is that the people who will write stories about this particular moment are still racing around in playgrounds. When their books come out, in 20 years, I may just about feel like revisiting the pandemic.

So many! I loved A History of Mischief by Rebecca Higgie (Fremantle Press) and Breasts and Eggs by Mieko Kawakami (Picador), which were like plane tickets to far-off places. Red Comet, the Sylvia Plath biography (Heather Clark, Jonathan Cape), was incredible. And a few weeks ago I randomly pulled out Praise by Andrew McGahan (A&U) and couldn’t put it down.