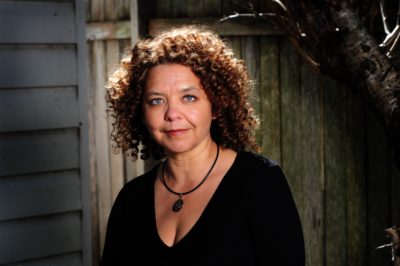 Malla Nunn’s Sugar Town Queens (A&U, August) is a young adult novel set in Sugar Town, South Africa. This coming-of-age story follows 15-year-old Amandla as she uncovers her family history and explores newfound friendships. Reviewer Tracy-Kate Simambo writes that ‘Amandla’s South Africa is both beautiful and deeply flawed, much like those she loves.’ Simambo spoke to the author.

Sugar Town Queens addresses some heavy topics, including race and poverty. What compelled you to write about these themes?

My family was classified as ‘coloured’ under the Apartheid regime in South Africa and as ‘mixed’ under British Colonial law. Being branded ‘non-white’ meant less economic opportunity, less education and less freedom to choose your own path in life.

Barred from holding ‘whites only’ jobs, forcibly removed from areas rezoned as ‘whites only’ and denied their property rights, non-whites were deliberately pushed into poverty by the law. Racism and poverty are part of my extended family’s lived experience. I wanted to explore the effect of both those forces on the present-day South Africa.

Was it difficult to write about the above issues for a young adult audience? How did you go about it?

I never set out to write a YA novel about heavy ‘issues.’ I wanted to write a story about the power of female friendship and the strength of human resilience. Racism and poverty are a part of township life but the girls have connection, they have community, they have each other. It was important to acknowledge the hardships that the girls faced but it was also important to show that there is light in the darkness. YA readers are more than capable of taking the bitter with the sweet.

Zulu culture features prominently in the novel. Why did you feel it was important to include?

My English great-grandfather settled in Zululand in the 1850s and had three Zulu wives. My maternal grandmother grew up on a ‘native reserve’ in Zululand and my father was born in the heart of the Zulu Kingdom. I’m part Zulu. My ties to Zululand and to Zulu culture are strong and writing Sugar Town Queens gave me the opportunity to celebrate my long overlooked black ancestors.

Are there any similarities between you and your protagonist, Amandla?

Amandla and I are both hesitant about stepping out of our comforts zones but once we make up our minds, we go for it! Amandla is very aware of her clothes and her township roots and learns to stand up for herself with the help of her friends. When my family moved from Swaziland to Perth I was very aware of my rural upbringing and my general ‘otherness’. Like Amandla, I was saved from myself by a great group of girlfriends.

Amandla is an amazing young woman and Sugar Town Queens is such a captivating read, would you ever consider revisiting her story in the future?

Hmm … I am interested in where the girls end up but I haven’t pulled that string yet!

For younger readers, Winter of the White Bear by Martin Ed Chatterton (Dirt Lane Press), for middle readers The Little Wave by Pip Harry (UQP), and all the YA books on the Prime Minister’s Literary Awards 2020 shortlist: