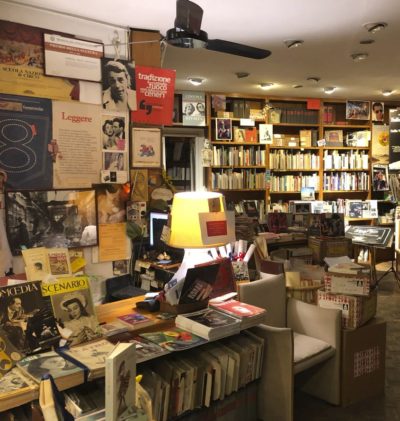 When, in 1979, Maria Cristina Spigaglia announced that she was going to open a specialist bookstore—specifically one that focused on the performing arts—she was met with confusion, scepticism, and even distrust in some cases. ‘To open a specialised bookshop at the end of the 1970s was a very courageous project because the dominant model in Italy was the generalist bookshop one,’ she explains.

In addition to going against the grain by opening a specialist store, she also faced specific resistance due to being a woman. As she prepared to open her doors, all the men she encountered in the industry ‘looked smiling with benevolent conceit at the naivety and lack of experience of a young pretty woman,’ she explains. ‘It was true: I was inexperienced, naive but determined! I was perfectly and deeply aware of what I wanted—and my passion for books was, and is, explosive. Well: nothing stopped me and, on a beautiful sunny day, I opened my bookshop.’

Libreria dello Spettacolo—which means Bookshop of the Performing Arts—is located in the historic centre of Milan, on the ground floor of a house dating back to the end of the 19th century. Nearby is an Art Nouveau coffee shop, a film library and music stores. The bookshop has remained in the same location since it opened. ‘The rounded floor plan of the shop and its three large windows were the things that seduced me when I saw it first,’ says Spigaglia. ‘It was love at first sight!’

‘The bookshop collects, catalogues, and resells books, specialist magazines, works and memorabilia related to the world of entertainment: theatre, cinema, dance, music, circus, mime, juggling, radio and television,’ explains Laura Teruzzi from the Milano UNESCO City of Literature. ‘The collection originated from the passion of the owner—and only bookseller—who started her business by buying hundreds of titles … selecting title by title, author by author … and then enriching her enormous catalogue also from private collections of artists and collectors.’

Within her specialty, Spigaglia points to what she calls a ‘superspecialisation’, where she has created an extensive archive of scripts. One of her plans for the future is to digitise this collection in order to help customers, scholars, and amateurs in their research.

The store has become a hub for researchers and the curious, with Spigaglia’s extensive collection and knowledge being a big drawcard. In addition to the texts available, there are also events and gatherings. ‘The bookshop is buzzing with activities like meetings, book presentations, literary parties, reading courses and even Tarot courses,’ she explains. Asked what customers have said they like about the store, she points first to the ability to address very specific queries. ‘In my bookshop, as in all specialised bookshops, they receive answers professionally targeted to their requests.’

The second thing she points to is the atmosphere. Her customers, same as her, also love the look and feel of the shop. ‘The bookshop is also much loved for the atmosphere that pervades the place’—and a big part of that atmosphere is music. ‘I love music very much. All of it. I listen to Vivaldi, Corelli, Mozart … Bill Evans, Keith Jarrett, Pink Floyd, Bob Dylan, Callas, Ella Fitzgerald etc. … I choose the music to listen to in the bookshop according to how I feel and also the weather.’

There is a clear joy and passion for what she does that runs through all of her responses. Asked why she chose the performing arts as her specialty, she explains how as a child her grandfather would take her to cinema under the stars during the summertime. ‘I was delighted with that world, the dubbed voices, the environments, the clothes. I began there to love the fantastic that took off the heaviness of the daily life.’

While there is a strong community connection built around the store, even after 42 years of operation, Spigaglia says there are those who still don’t understand what she is selling—who are not aware of the breadth of theatrical texts available. ‘For example, theatre professionals still think that after the usual classics and the latest contemporary authors there is nothing else … they dramatise well-known novels, while I have thousands of theatrical texts from the 1700s, 1800s and early 1900s in my library that nobody knows!’ However, these people don’t make up the majority. In 1986 Spigaglia’s work with the bookstore was recognised when Libreria dello Spettacolo received the Premio Della Cultura (Prize for Culture) from the Presidency of the Council of Ministers. These days, while she is as passionate as ever, Spigaglia says, ‘I have stopped getting indignant. I go on with my work and inject enthusiasm and energy into the heart of every boy/girl who comes in here for a book!’