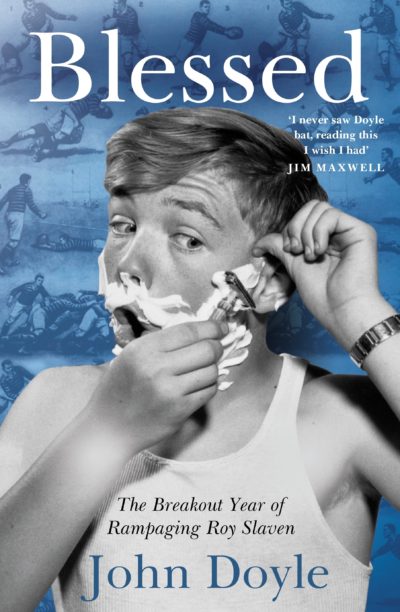 Who is Rampaging Roy Slaven? An Australian icon, a raconteur, an athlete of unsurpassable—and some may say improbable—sporting feats. Whether it was riding Rooting King to another Melbourne Cup victory, commentating the Olympics or hobnobbing with the country’s upper crust, Rampaging Roy Slaven has lived an extraordinary life.

But even some of the greatest men come from humble beginnings. Blessed follows one year in the life of the boy who would become Rampaging Roy Slaven, a boy who, even at the age of 15, knew he was destined for greatness but had to get through high school first.

John Doyle is one of Australia’s finest writers for stage and screen. He created the character of Roy Slaven in 1985, for ABC radio station Triple J. Since 1986, Roy has appeared alongside H G Nelson on various television series, including Club Buggery, The Channel Nine Show, Win Roy and H G’s Money, The Dream, The Monday Dump, The Ice Dream, The Cream, The Dream in Athens and The Memphis Trousers and the long-running Sunday afternoon radio sports program This Sporting Life on Triple J.

In 2010, John was made a Member of the Order of Australia for his services to entertainment and as a supporter of charitable organisations such as the United Nations Children’s Fund in Australia. John is Patron and a life governor of Autism Spectrum Australia.

Blessed: The Breakout Year of Rampaging Roy Slaven by John Doyle is out 28 July 2021.