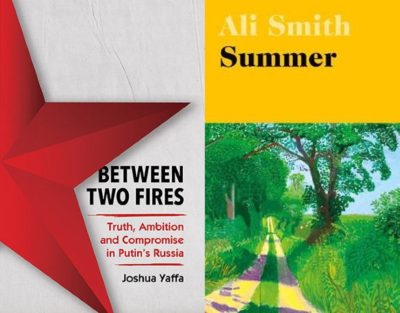 Smith was awarded the political fiction prize for Summer (Hamish Hamilton), the final book in her seasonal quartet. Two other books in the series have previously been in the running for the prize: Winter was shortlisted in 2018 and Spring was longlisted in 2020.

‘Capturing a snapshot of life in Britain right up until the present day, Smith takes the emotional temperature of a nation grappling with a global pandemic, the brink of Brexit, heart-breaking conditions for refugees, and so much more,’ the judges said. ‘It will serve as a time-capsule which will prove to be essential reading for anyone seeking to understand the mood of Britain during this turbulent time.’

Yaffa, a Moscow-based correspondent, won the political writing prize for his debut Between Two Fires: Truth, ambition and compromise in Putin’s Russia (Granta), which was described by judges as ‘beautiful and haunting’. The book presents a series of written portraits of subjects including TV producers, priests and human rights activists, all trying to thrive in contemporary Russia.

The annual book prizes, worth £3000 (A$5490) each, are awarded to one nonfiction and one fiction work that come closest to George Orwell’s ambition ‘to make political writing into an art’. The awards are presented alongside separate prizes for journalism and for ‘exposing Britain’s social evils’.

For more information about the awards, see the prize website.