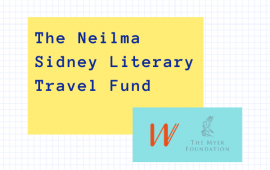 Writers Victoria has announced the sixth round of recipients for the Neilma Sidney Literary Travel Fund. Round six was delayed in early 2020 due to Covid-19 and travel restrictions, and was reopened for applications in April 2021.

The successful recipients are:

The judges for this round were Jaclyn Crupi, Jeanine Leane and Renée Otmar who were ‘impressed with the overall quality of the applications in what was a competitive round’, awarding a total of $58,687 to the 12 recipients.

The Neilma Sidney Literary Travel Fund was opened in 2017 to provide emerging, mid-career and established Australian writers and literary sector workers the opportunity of travel in the development of their practice, careers or the broader Australian literary sector.