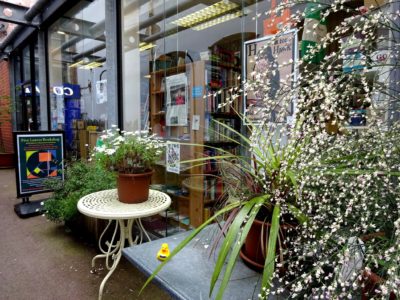 ‘The shop opened the year the number of independent bookshops fell below 1000 for the first time ever,’ says Ross Bradshaw. ‘This felt like an opportunity rather than a threat,’ he adds. Since 2013, Bradshaw has been the owner and manager of Five Leaves Bookshop, an independent bookshop right in the centre of Nottingham in the UK.

‘It is not just one of Britain’s best Indie bookshops (officially: it won that title in 2018) but … also represents Nottingham’s famously radical spirit—Byron, Lawrence, Civil War, Luddites, and of course, a certain outlaw with a bow and arrow—through its eclectic range of books on a range of topics you’d struggle to see in chain stores or Am*z*n,’ says Nottingham UNESCO City of Literature office’s Matt Turpin.

‘They’ve bucked the trend of high street retail by not just surviving, but thriving since they opened in 2013, offering an inspired program of events as well as a place to buy books. This has proven to be fertile ground for creativity: writers and readers mixing together to bring forth new ideas and projects. Indeed, the idea of Nottingham becoming a UNESCO City of Literature was seeded and nurtured there; and they still play a key role in our activity and strategy.’ 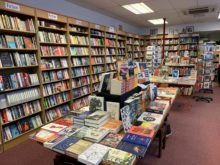 While the store has been around for eight years, Five Leaves itself has been a part of Nottingham’s literary culture since 1995, when it originally opened as a publisher. Over this time they’ve published around 200 books. ‘Five Leaves was a commissioning press and I was running out of ideas … so we opened a bookshop!’ says Bradshaw. ‘We still publish, but at a much more modest level.’

The store’s focus areas are also, it seems, sometimes subject to very sudden change. ‘In our second year I went on holiday and on my return discovered that our crime fiction section had disappeared … and our poetry section had tripled in size,’ Bradshaw recalls. ‘One of our workers was a poetry obsessive. It was the right decision.’ It’s not the only time this has happened. ‘Over a weekend I was off, an environment section appeared. One of our workers … you guessed it.’

Five Leaves is a vibrant part of the Nottingham community. In addition to the store, they (in a normal year) host a lot of bookshop events. ‘This peaked, before Covid, at about 100 a year, plus our own mini-festival. Take out August and the Christmas period and we were probably doing three events a week!’

The store’s role in the community has been recognised in a number of ways. In 2018 it won the Independent Bookshop of the Year award, and was shortlisted again the following year. The store has also won a Rainbow Heritage Award.

Asked what his favourite aspect of the store is, however, Bradshaw’s answer comes back to the day-to-day, to people. ‘Unpacking parcels, thinking who might buy such and such a book, then watching to see if they do,’ he replies. ‘We have lots of regular customers we talk to about books. But it’s the surprises … I read a great review in the Times Literary Supplement on dress in medieval England and got the book into stock thinking anyone who read that review will buy the book. Every time we put the book on display we sold it, and not one of those had read the TLS. This, in a radical bookshop that had no other books on medieval history and nothing at all on fashion. I sometimes think we should just hand the book buying over to our customers!’