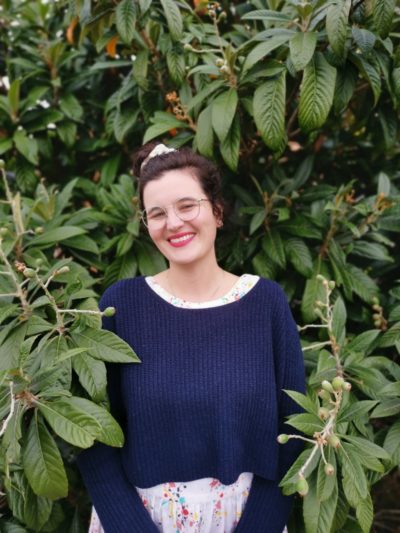 Road Tripping with Pearl Nash (Wakefield, September) is Poppy Nwosu’s third romantic novel for young adults. It follows protagonist Pearl Nash on a road trip during the summer holidays before her final year of school, exploring friendship, love, grief and the courage to move forward in life. Reviewer Ilona Urquhart calls the novel ‘a perfect balance between humour, romance and wisdom’. She spoke to the author.

There are so many threads in Road Tripping with Pearl Nash: a road trip, an enemies-to-lovers romance, a family rift and a broken friendship. Which plot came to you first, and do you see that one as the most important?

What a great question! I always seem to start with the romance elements first when I am dreaming up a new YA story. As a reader, the romantic thread in any story is always something I focus on and enjoy a lot, so I think that is why, when it comes to my own work, I love writing those bits the most. I am a big romantic at heart, so I spend a lot of time focused on the slow—and I hope believable—development of feelings between my couple, and that is usually the first thread I develop.

However, kind of in tandem with that romantic element, I also like to start with a deeper understanding of my setting. For example, what the landscape and weather is, whether it is hot or cold etc. I think having those elements in place really help in creating an atmosphere for a new project.

So, as a bit of a discovery writer, all I really knew about this story when I first got started was that it would feature a bickering enemies-to-lovers romance and chronicle a road trip in a slightly fictionalised version of the South Australian rural areas I have often travelled with my husband. Oh, and I knew that it would be really hot! (Even though I wrote the first draft surrounded by mist and rain in the middle of winter at Varuna the Writers House!)

Pearl and Daisy’s strained friendship really resonated with me. It’s easy to blame Daisy, but I like how Pearl’s nana offers a different perspective. Why did you include this in the novel?

I love that you have asked this question! So, the strained friendship in this book actually gave me a lot of grief, if I am honest. I had to work really hard, first by myself and then later with my agent and editors, to try and draw out this plot point and make the splintering relationship between Pearl and Daisy feel real and logical. This element of the story changed hugely during the editing process, to such a level that it had really morphed into something quite different than what I had originally intended to write. So much so, that I think in some ways I couldn’t really see their relationship clearly anymore.

An amazing thing happened at the end of the editing process, though. A draft of my novel had been sent to the incredible Jaclyn Moriarty, and she was reading it with a view to endorsing it (which made my fangirl heart explode with happiness!). Jaclyn actually came back with a small suggested tweak for the resolution of the friendship storyline between Pearl and Daisy. I loved the idea, and it made so much sense to the story, so I jumped to include it.

So, in the end, without spoilers, the fresh perspective that Pearl’s nana offers her about Daisy toward the end of the book was actually a fresh perspective introduced into my novel by Jaclyn Moriarty! I love it, and feel it makes the book so much stronger.

It also felt incredible to have received constructive feedback from a writer whose book Finding Cassie Crazy was one I re-read constantly growing up, and which was actually a main inspiration for writing my rom-com books in the first place!

You’ve said previously that you have a lot of fun with the chapter names. In this book the chapter titles are all names of Australian native plants. Can you tell us about their significance?

This is an interesting one because, yes, I get quite fixated on chapter titles when I write. I think that writing can get so difficult and you can feel very bogged down sometimes in the work of creating a manuscript, so chapter titles for me have always been like a little creative release. I find them very fun and quite freeing.

I chose the Australian native plant names for these chapter titles because of the desert and coastal locations I was writing about. It was only later on while writing the book that I decided they should really have some sort of deeper meaning within the story if I was planning to use those names as chapter titles. So that is how the idea of Pearl’s nana loving those plants came into being, and also it got me thinking more about the contrasts between city living and rural living, which I wanted to explore in this book.

As a discovery writer who does not do a lot of plotting before I begin on a new project, it is moments like this that make me feel that writing can be magic. Something you hadn’t really planned or thought deeply about can suddenly become a significant element of your story or your characters. To me, it always feels like I am trying to connect a tapestry of hundreds of tiny separate ideas to weave them into a coherent whole. And those moments when ideas actually do connect, and make sense in my story in a way I had never quite planned, are absolutely why I love being a writer. Most of the time, writing is hard. But sometimes, it feels like magic.

Your protagonists always have so much personality and are incredibly loveable in their own ways. How did you find writing Pearl compared to Lottie or Alice?

Oh, thank you, that feedback is so lovely to hear! Pearl was such an interesting character for me to write, but she was actually quite difficult for me to get a handle on at first. I felt like the personalities and characteristics of my previous protagonists just rolled out easily, and without much thought on my part. Yet Pearl was a lot harder. I have thought a lot about why this could be, and in the end I came to the conclusion that it was because Pearl is actually quite an average girl.

I think it is easier to write a character who is extreme. For example, in my previous stories, Lottie was a metal-head and insanely outgoing, while Alice lived her entire life internally, was hyper-focused on study and uninterested in other people. Both were, in a lot of ways, polar extremes, which is why they were so fun to write.

Pearl, though, feels like she fits somewhere in the middle. She likes a lot of different things, instead of focusing only on one hobby. She is shy, but not too shy. She can be outgoing when she is comfortable with people, but not too outgoing. People in real life are so many different things, so complex in all their contradicting layers, and I wanted to explore that with Pearl. It was quite a challenge, but also a lot of fun.

One of my favourite parts of the novel is Obi’s obsession with horror movies and his fear of ending up in a Wolf Creek scenario. As you’re also curating and contributing to the upcoming anthology Hometown Haunts: #LoveOzYA Horror Tales, you’re clearly a horror fan. Why did you choose to include horror references in Road Tripping with Pearl Nash?

Oh yes, I am definitely a big horror fan, though my favourite horror stories lean more towards the weird and unsettling, so I think that Obi has slightly different horror taste to me! It has been such a pleasure, and such a challenge, putting together Hometown Haunts: #LoveOzYA Horror Tales and I am so proud of what it has turned into. It comes out on Halloween 2021 and I can’t wait for people to read the incredible stories that our authors have contributed. So yes, I am definitely a huge horror fan!

Obi’s obsession with horror movies in the story really came about from my own road tripping experience in the past. When my husband first moved to Australia many years ago, we went on a huge road trip into the desert, and those images of small, isolated tin-shack towns and strange backyard petrol stations always really stuck with me. As a traveller, you feel very isolated out there in such an unfamiliar place, and at times I didn’t want to stop the car if a location felt too scary. So, Obi’s feelings around a Wolf Creek-type scenario definitely stemmed from my own during that time. Of course, we arrived home safely, but I loved the idea of exploring those same fears through Obi’s eyes.

Lastly, as a bonus question, I’m sure all readers of Road Tripping with Pearl Nash have to know: would you rather be a serial killer or be serial killed?

Gosh, I LOVE this question. It made me laugh. Although I don’t feel super enthusiastic about it, if I was forced to choose, I would have to say that I would rather be serial killed, than be a serial killer. I am not a monster, after all!