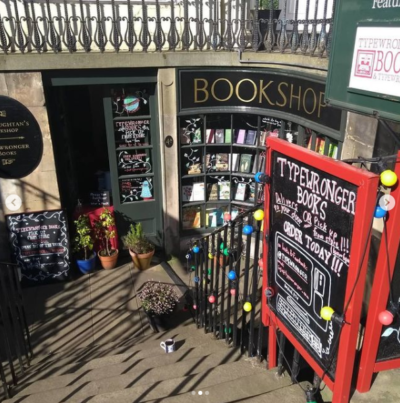 Down a small flight of stairs, in a brightly lit Edinburgh basement that was once an art gallery, is a cheerful store filled with books, typewriters and a whole lot of personality. This is Typewronger—and in just four years it has come a long way.

‘There are so many bookshops we adore, but we suggested this cosy wee basement bookshop as it combines thoughtful curation with a truly unique experience for book lovers,’ says Siân Bevan from the Edinburgh City of Literature office. ‘In non-lockdown times [it] is known for its comfy seats, nice lighting, vinyl records, origami animals and thoughtful touches everywhere you look. And, if that wasn’t enough, they also fix typewriters.’ 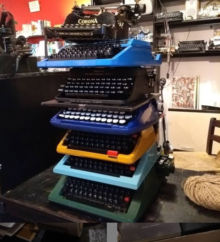 ‘Typewronger started on the 5th of November 2017 when I started selling my own books from the Leith Walk Police Box just down the road from where we now are,’ says owner Tom Hodges. ‘Yes, my other shop’s a TARDIS!’

Things have happened quickly and explosively for Typewronger. ‘We’ve grown a hell of a lot, even if we’re still the smallest in town. Even when we moved into the new premises, I initially had to curtain off the back section as we couldn’t afford enough books to fill the shelves!’ Before the store set up, there were no indie bookstores in that particular part of town. The space the store is now in is hosted by the oldest antiquarian bookshop in Scotland, McNaughtan’s, and over the time Typewronger has been in the shop it has built up a dedicated following. ‘There’s a huge community of readers, writers, artists and musicians who use the shop as an events space, a place to work, a place to unwind, and a place to connect to others,’ says Hodges.

Asked what his role at the bookstore is, Hodges has a few different answers, though perhaps one of the most fun is ‘”The nice Bernard Black” due to my habit of doling out wine to customers in the evenings.’ 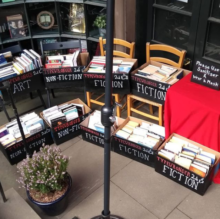 His answer about the kinds of books stocked in Typewronger is simple. ‘Good ones … we’re Edinburgh’s smallest bookshop and so every title’s got to earn its place, and the main feedback I get is how clearly curated the shop is,’ Hodges explains. ‘Usually folk respond well to this—a lot of customers take heart that there’s a bunch of stuff they don’t know next to a heap they do and love—means they’re probably onto a good seam of reading!’

One focus area the store is known for, however, is its poetry. The section is located in a little nook with an armchair near the back of the store, and contains ‘some great classics next to lesser known poets, up and coming poets, small presses, chap books, and of course zines and art books.’ Hodges is also big of sci-fi and fantasy, and there is a good selection of contemporary literary fiction, history, biography and theatre.

The Typewronger team is also careful to reflect the area the shop is located in. ‘Technically we’re in a part of town called “Broughton” which was the witchcraft centre of Edinburgh back in the day, and we have a small but well put together occult section reflecting this.’ Asked what their strangest request so far has been however, Hodges replies, ‘Someone once ordered a pornographic knitting book—that was pretty out there.’

Their community is the core of what they do. ‘They’re a cracking bunch and we’re nothing without them,’ says Hodges. 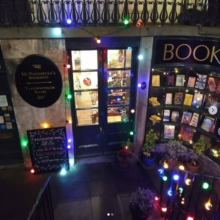 Prior to Covid the store hosted numerous book clubs, a play reading group, and free weekly events. It also hosted a monthly open mic ‘where folk would perform poetry, music, prose, short stories, philosophy, acrobatics and magic tricks’. For the time being this has been moved onto YouTube, but the store is excited to bring it back when conditions allow. While the pandemic has taken a lot away, it also, strangely, has kicked off a new tradition for the store. ‘Last Christmas a large number of folk found they were on their own because of the travel restrictions,’ Hodges explains. ‘As it was still permissible within the rules to open the shop on Christmas Day we did … and gave out free vegan lentil soup which folk ate outside on the steps (socially distanced of course!). We’re going to keep doing this as a tradition from now on.’

While things are still distanced and waiting to get back to normal, ‘Typewronger offer free reading consultations over Skype or Zoom, to help put you in touch with the perfect publication,’ explains Bevan. ‘For us, Typewronger is a great example of how an indie bookshop experience can be imaginative, kind and professional … everything which you could hope for from the world’s first City of Literature.’