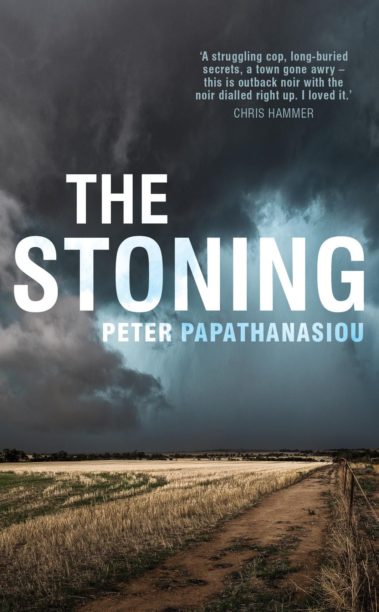 At dawn one Sunday, homicide detective George Manolis is woken with a call: a schoolteacher has been murdered in the outback town of Cobb, and the local police need his help. He knows why he was the one chosen for this job, but when he gets there it’s clear nobody wants his assistance. Cobb is a small, closed-in town, suffering from the broken promises of the detention centre that brought jobs only to outsiders and added an extra layer of misery to the dust and heat. The crime—Molly Abbott was tied to a tree and stoned to death—has directed the town’s rage towards the detention centre’s Muslim occupants, but Manolis doesn’t make assumptions. In an environment simmering with racial tensions and an escalating, deadly distrust of the law, Manolis must find out who killed Molly before the truth becomes lost to the town’s bitter history forever. In the tradition of Sarah Thornton’s Lapse, Chris Hammer’s Scrublands and, of course, Jane Harper’s The Dry, The Stoning grips from its disturbing opening to its high-octane showdown. This book has everything Australian rural noir readers could want: suspicious townsfolk, searing heat and a flawed main character given a case bungled by local law enforcement that seems unlikely to hold up in court. Peter Papathanasiou’s debut novel is a bleak, harrowing look at small-town racism, hypocrisy and intolerance, and an altogether gripping read.