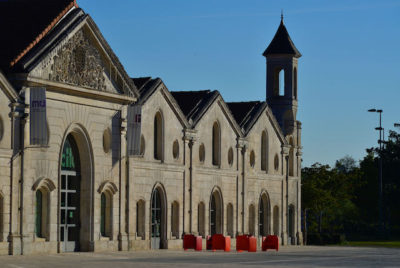 Angoulême in Southwestern France has a strong connection with the written word, tracing at least as far back as the 11th century. Not only that, but it has also played an ongoing role in what those words are written on. ‘Angoulême has been an important paper house with a varied and high-quality production of letter paper to cigarette paper,’ says Sylvain Pothier-Leroux from Angoulême UNESCO creative city. ‘It is natural that many bookshops settled in the city of Valois throughout centuries.’

Something else Angoulême is well known for is its annual International Comics Festival, an event that reflects the vibrant comics culture of the area—something which has been growing over the past 50 years. ‘It is only fair that comics has its own dedicated bookshop in Angoulême, next to the Charente river where paper used to be made,’ says Pothier-Leroux.

‘The bookstore itself was opened about 30 years ago,’ explains Aurélien Chaignepain, who is in charge of all the store’s comic books for people over the age of 14. In 2009, however, the store moved to new, more spacious premises.

Now, ‘the bookstore is located in the Saint-Cybard district of Angoulême, at the bottom of the centre of the town,’ says Chaignepain. ‘The actual building we are in is a beautifully renovated architectural structure from the 19th century, which used to be warehouses for all sorts of industries, and most recently cellars to stock felt pens and pencils, linked to the paper industry which flourished in the town many years ago.’

The store caters to virtually any comic-related interest a customer might have—though this does mean strange requests from time to time. ‘There are so many we could write a book,’ says Chaignepain. ‘I’ve been asked for a comic book to teach dogs how to read, I’ve been asked if Mein Kampf had been adapted in a comic book, I’ve been asked very solemnly by parents the most violent and goriest comic book I could find for their 8/10-year-old son.’

La librairie de la bande dessinée et de l’image is a big part of literary life in Angoulême, taking part in book festivals and arranging author events. This has been the way for the past 30 years, and it isn’t going to change any time soon. Asked what their plans for the future are, Chaignepain’s response is straightforward and enthusiastic: ‘To continue to be a major part of the local and national cultural life—and of course to continue to read and sell many, many fabulous comic books to come!’