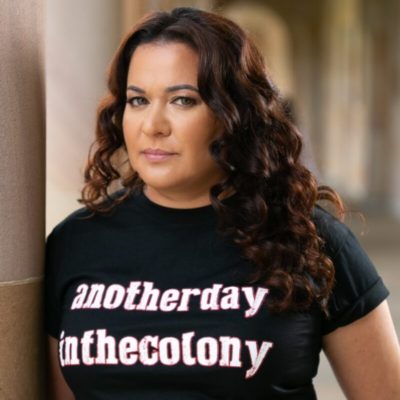 Chelsea Watego on ‘Another Day in the Colony’

In the acknowledgements you beautifully describe the feedback early versions of the book received from one of your mentors, scholar Aunty/Dr Lilla Watson. Did your family and Black community make the writing process easier for you?

Well it all depends on what is meant by ‘easy’. For the Black writer, writing for our own people is certainly easier than appealing to the colonisers, but it demands an accountability, and that part isn’t so easy. In fact, it’s really scary. I remember sitting at those tables with Aunty Lilla and Uncle Shane [Coghill] and being so nervous, but at the same time I was so grateful for their generosity in the time they had given me. It was after having been gifted their critique that what followed came easy, I just felt so much stronger about the work. And it wasn’t because I had got the account of things ‘right’ necessarily, but this was the right process.

I think I would have been more uneasy had I not sought feedback from mob, particularly those who were included in the book. There’s a different kind of energy writing for Blackfullas exclusively and being accountable to that Black audience. Writing becomes more than a kind of intellectual labour for the lone writer—but a relational enterprise that simultaneously speaks to both author and audience in all kinds of powerful ways.

The structure of Another Day in the Colony is powerful and reminded me of archival poetry by Natalie Harkin and Charmaine Papertalk Green. Did you imagine early on that you would include images from your personal archives such as your daughter’s Harmony Day drawing, court briefs, PhD certificate and police indictments?

I always wanted to included Maya’s drawing in the story and as I thought about it reflecting a particular representation of me, I began to think of other accounts of me and how they could hold the story together. The chapters are all standalone essays but they are structured in such a way to be read chronologically as a book.

In including those visual inserts I wanted to show the limitations of the state’s account of things in how I’ve been ‘known’ whether via deviance, defiance, drunkenness, as administratively Indigenous, as culturally other, or academically excellent. Knowing who we are in the colonial situation demands of us a refusal to subscribe to their imagining of us, realising the absurdity of the contradictory nature of the stories they tell, while being cognisant of the weight of authority afforded them.

You make it really clear that your book is for Blackfullas, which is an urgent departure from anti-racism literature focused on appeasing white guilt. Are you optimistic that this stance might help to resolve the impact white fragility and educating others about racism has on First Nations people?

Yeah, it has always struck me how racist the anti-racist space is—so much of it is bound up in appealing to the perpetrators rather than the victims. As a reader wanting to understand race and racism better, I could tell the difference between the texts that were written for me and those that weren’t. Encountering the latter felt like a betrayal, in part because of the sheer volume, and too in the lies they told about race.

I remember the first conference I spoke at about racism was in 2015, at the Leaders in Indigenous Medical Education Conference in Townsville. I had prepared [my talk] in such a way that pre-empted the resistance against it because I had become so accustomed to it. Yet that conference was an almost entirely Indigenous audience packed into a lecture theatre and I could hear the silence being interrupted with these hums of approval, which gave me strength to speak, not defensively but sovereignly. I love seeing the strength restored to Blackfullas when we speak to each other. This has to be the purpose, first and foremost, of writings on race—it must remind us of, return to us the sense of self that those daily indignities rob from us.

I loved the way you include a list of music at the end—the songs that brought joy while writing this book. Did you plan this early on? Or was it a way to show Black people living rather than surviving as the work progressed?

It was actually a suggestion from a colleague, Dr David Singh, to include my playlist. I always write to music played really loud. There’s always a mood or a feel to whatever I write and music helps get me in the place I need to be, it’s hard to describe. The place from which this book was written was during a sustained period of sick leave, so those songs were a real lifeline for me in all kinds of ways.

Much like those documents in each chapter, the footnotes, the acknowledgements and citations, it represents a showing of the workings of how I came to telling this story. I was also conscious that the book is heavy in parts for the Black reader, and I felt troubled by that prospect. Hence the playlist and the final chapter ‘on joy’. I wanted to leave the Black reader with a sense not of hope, but joy and the songs that helped me. Also, Blackfullas and playlists are a thing.

Your ability to move between academia, journalism, advocacy and radio is outstanding. After writing a book is there a form of storytelling that resonates the most with you?

Thank you so much! In writing in different places and styles I’m interested in broadening the audiences for the intellectual work that I’m involved in and I don’t know if I have a favourite. I’ve struggled with the pace of writing journal publications and books, because by the time they arrive in the reader’s hands, my thinking may have already shifted. I know too that there is a limited audience for those kinds of texts.

I love the immediacy and accessibility of radio and online editorials and the impact they have. I’ve written commissioned work for audiences who despite engaging my services don’t necessarily like what I have to say. I have come to realise the power of writing things that are not so popular, and the privileged positioned of being able to speak a truth that others may be prohibited from telling.  Writing is a means by which I fight, and each style and platform is just a different weapon, and I love the challenge of sharpening new weapons. Next up, I want to try scriptwriting.

So I recently read Distinguished Professor Larissa Behrendt’s After Story (UQP) and it was exactly the kind of text that I had been talking about wanting to read. I could see myself, and hear my voice. It didn’t read as an educative appeal to settlers, and was so very clever in the way in which [the protagonists] Della and Jasmine represented that kind of double consciousness that Dubois spoke of and the tensions between Indigenous and western knowledge systems.

I particularly love Larissa’s way of being in the world—there is a real generosity of spirit there which is too evident in the ‘well-rounded’ Indigenous characters she creates, characters that she observed were denied us, in the analysis she provides in her nonfiction text Finding Eliza (UQP). Larissa has long been one of those people who I respect and admire because of the cohesion between all of her work and her being, and she has really shown the rest of us the possibilities for what we can do as academics, as writers and as Aboriginal women in the colony.