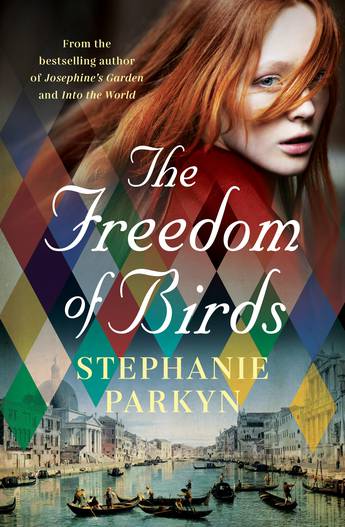 For the charming, self-absorbed Rémi Victoire and his faithful companion, Pascal, the life of itinerant storytellers allows them to forget the staggering betrayal that first caused them to flee Paris. For contortionist Saskia, it’s a means to escape her brutal kidnapper. But their way of life is ending, and as Napoleon’s empire crumbles around them, their wandering leads them further afield: to the rebel theatres of Venice, sumptuous opera of Milan, and to the bloody battlefields of France. The Freedom of Birds is Stephanie Parkyn’s third novel, completing the loose trilogy that began with Into the World and Josephine’s Garden. Parkyn richly imagines a Europe bristling under imperial control, and her characters feel vital to her setting. It’s clear that Parkyn has researched the historical period extensively, but the depth of detail never becomes intrusive. It’s the characters that truly shine in this novel; Rémi, Pascal, and Saskia are real enough to touch. Even Parkyn’s minor characters feel fully realised, as if they each have intersecting backstories of their own which the audience only glimpses. The Freedom of Birds is both an epic journey and a gentle meditation on love, forgiveness, and the value of art. It is historical fiction for lovers of Tracy Chevalier or Kimberley Freeman.

Catherine Moller is a freelance writer and editor who has previously worked with Titan Books, Queensland Writers Centre and Alex Adsett Literary. She speaks to the author of The Freedom of Birds here.