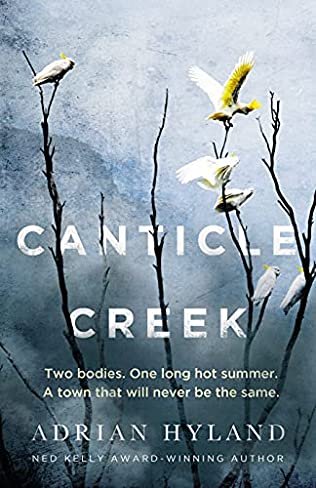 When Daisy Baker’s body is discovered on her outback property the case appears to be straightforward. Daisy’s boyfriend Adam Lawson, new to the Victorian town of Canticle Creek from the Northern Territory, is named the killer. His body is found in a car crash a kilometre away while ‘escaping’ the crime scene, and the case is wrapped up. Territorian Constable Jesse Redpath knew Adam from up north and doesn’t believe him capable of such a crime. On a trip to Victoria with her artist father, Jesse digs around and uncovers some contradictions, secrets and truths about the inhabitants of Canticle Creek. An array of complex, eclectic and engaging characters—greenies, loggers, artists, botanists, underworld criminals and more—people the pages of this novel. The writing is generous and whip-smart, with sentences that will stop readers in their tracks to savour them. Adrian Hyland is an award-winning writer of both fiction and nonfiction and his skill and confidence with the craft is evident here. His knowledge of the Australian wilderness, of its dangers and its beauty, is spot on. Heart-racing twists propel the novel to its denouement, while the oppressive heat and arid landscape add an extra layer of threat to the unfolding drama. This is one for Australian rural crime lovers and will appeal to fans of The Dry and Scrublands.