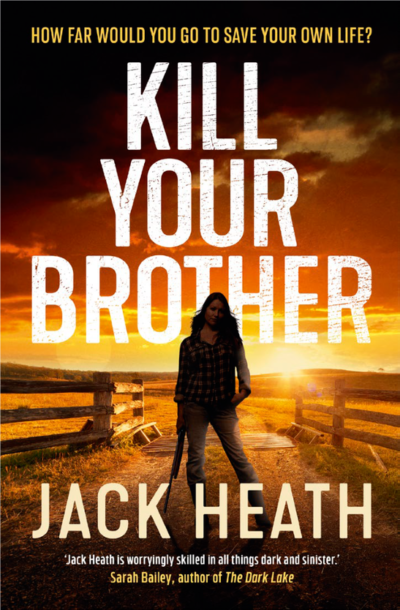 Kill Your Brother by Jack Heath is a taut thriller brimming with suspense and secrets. In regional NSW, a sister’s desperate search for her missing brother becomes a devious game of cat and mouse—between captor and captives, between brother and sister. Elise is a disgraced former athlete who has let down not only her community and country, but also her family. Her brother Callum, the only one still in her corner, is missing and the police have seemingly abandoned the case. With nothing left to lose, Elise is unrelenting in her pursuit of Callum. But a chance encounter plunges her into the very same prison that he has been locked away in for months. Their joyous reunion is short-lived. Their captor has revenge on the mind, and the only way Elise will be allowed to walk free is to kill her brother. Filled with twisted truths and unspeakable lies, Kill Your Brother is the dark story of a brother, a sister, a mother and the stories we tell ourselves to justify our actions—and the actions of those we love. Perfect for fans of Gabriel Bergmoser’s The Hunted and Catherine Jinks’s Shelter, Kill Your Brother is a page-turning crime novel that will leave you questioning everything you think you know about the people you love.

Kate Frawley is a bookseller and the manager of The Sun Bookshop.

This is Not a Book About Benedict Cumberbatch (Tabitha Carvan, HarperCollins)  Nonfiction