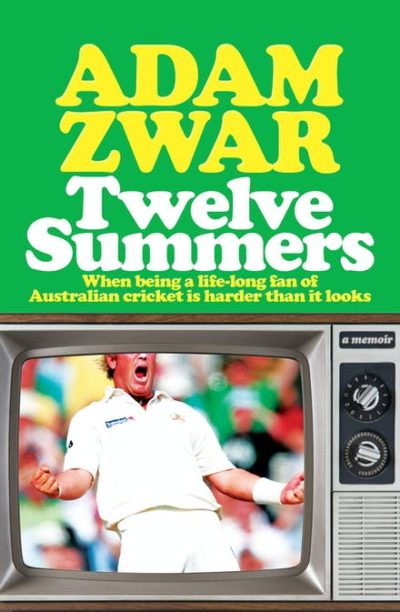 Twelve Summers is a memoir by actor and writer Adam Zwar, structured around the retelling of several memorable performances by the Australian men’s cricket team during the author’s formative years. As a not-so-gifted player himself, and something of an outcast—first at primary school in Cairns, then at boarding school at Brisbane Grammar—Zwar becomes more of a watcher than a participant of the sport. He is obsessed with the players, the commentators and their little rituals, and his passion for cricket is an escape from incidents of bullying and abuse at school. The book recounts the 12 most significant cricket seasons in Zwar’s life, beginning with the 1980–81 Australian Summer and ending with the 2006–07 England tour of Australia. Interspersed is the story of Zwar’s professional life, from aspiring actor while at university to a career in journalism, and finally cracking it as an actor and producer for TV. The strength of Zwar’s memoir is in the way he recreates the suspense from the historical cricket matches and tournaments. As well as covering the most dynamic and successful era of Australian cricket, the book also highlights the changes to the sport as it becomes professionalised and modernised. Sometimes, however, the serious aspects of the memoir—revelations about ritual abuse at Brisbane Grammar, and Zwar’s mum’s cancer diagnoses, for example—jar uncomfortably with the more lighthearted passages on cricket. Despite that, Twelve Summers is a fun trip through the glory era of Australian cricket, with enough anecdotes and research to appeal to serious fans as well as casual watchers of the game.

Brad Jefferies is the digital editor of Books+Publishing.