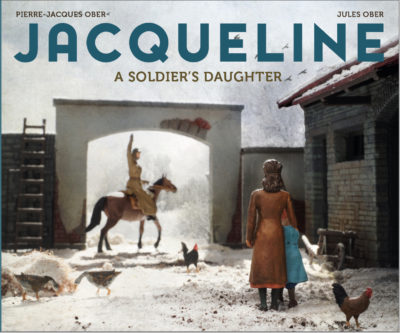 Jules Ober has won the 2021 Histoires Photographiques (HiP) prize for best photography book in the youth category with the French version of Jacqueline: A soldier’s daughter (Le Seuil Jeunesse). Jacqueline is written by Pierre-Jacques Ober and published in English by Ford Street Publishing.

Told through photographs of figurines in miniature sets, Jacqueline follows the story of an only child who has always dreamt of having a sister. Amid the turmoil of WWII, Jacqueline embarks on a perilous journey and finds a sister in the most unexpected way.

Jules Ober is a Melbourne-based visual artist who works across multiple platforms including illustration, photography, film, fine art printmaking and multimedia production. Ober’s first book, The Good Son (Walker Books), which was also co-created with Pierre-Jacques, was shortlisted for the CBCA Picture Book of the Year and was the winner of the NSW Premier’s Young People’s History Prize in 2020.

In its third year, the HiP prize awards authors of French-language photobooks and monographs. Jacqueline will be part of a travelling exhibition in which open photographic books will hang as art in galleries across French-speaking countries in 2022.