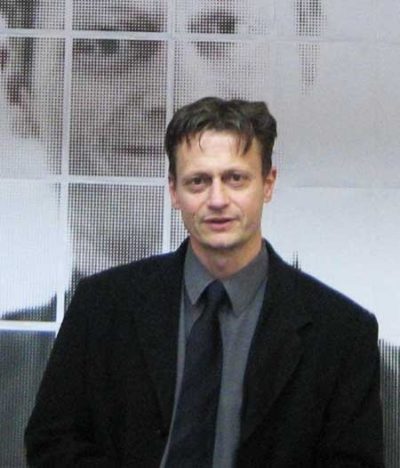 MacLeod wrote 26 books for children and young adults, published in Australia and around the world, beginning with Tales of Tuttle, published by Puffin in 1985. Many were bestsellers and won awards, including Sister Madge’s Book of Nuns (1986).

MacLeod was also a playwright whose works include the book for the stage adaptation of Snugglepot and Cuddlepie, and was head writer for some of Australia’s most popular TV comedy shows including The Comedy Company, Fast Forward, Full Frontal, Col’n Carpenter, Kylie Mole and Wedlocked. He also wrote for Big Girls’ Blouse, The Micallef P(r)ogram(me) and SeaChange, and was the script editor on Kath & Kim.

‘Born in Greensborough, Victoria, Doug spent his childhood in Gippsland. He commenced writing a column for the Age newspaper at age 16. His first book was a compilation from his column titled Hippopotabus, published when he was 17. It featured a poem called A Damaged Alphabet Rhyme, which prompted a fan letter from one of his idols, John Cleese.

‘Buoyed by this early success, Doug set aside dreams of becoming a magician and an illustrator, and instead concentrated on writing. He did, however, draw the illustrations for Tales of Tuttle, his first book published by Penguin, with whom he went on to have a long and rewarding relationship.

‘A writer of immeasurable ability, equipped with a bewildering knowledge of obscurity, Doug would, during his career, turn his hand to an extraordinary array of forms but his early training was in playwriting. As a student at the Victorian College of the Arts (VCA), he wrote numerous sketches and plays and made many lasting friends, some of whom went on to act in the hit TV show The Comedy Company, with Doug as head writer.

‘Away from the world of television Doug was a devoted and disciplined writer of fiction. He loved living in the pages of his newest novel, and sharing his work with his young readers at schools, libraries and festivals around the country. He was a writer of exceptional talent and versatility and one of the warmest and funniest people you could ever have at the dinner table. In both his life and his work he was generous and curious and had the most marvellous capacity to be silly in an increasingly taking-itself-too-seriously world.

‘On his website Doug tell us, “I wasn’t good enough at magic,” and yet he spent his life spinning precisely that for audiences and readers around the world.’

‘We knew he was a genius when we first worked with him at the VCA, he could write a script, try out several endings and put it on in a few days. He was wonderful with actors, and a wickedly fast improviser (even though he would deny he could act). All the actors loved the comic roles he created. During our time at the VCA, as an improviser and then at Comedy Company we were in awe of his prodigious talent. He was fast, funny and a beautiful man.’

‘Doug was a brilliant, modest genius who captivated book readers and made actors famous. His skill, imagination and sensitivity transformed characters in sketch comedy into real people with real lives and real feelings. Ever alert, ever inspired, ever obliging, he was the best writer, editor, collaborator and work partner one could hope for.’

A service to honour and celebrate the life and work of Doug MacLeod will be held at the Victorian Pride Centre, 79/81 Fitzroy Street, St Kilda, Victoria on Friday, 3 December at 1pm. Please note that all those attending must be double vaccinated.