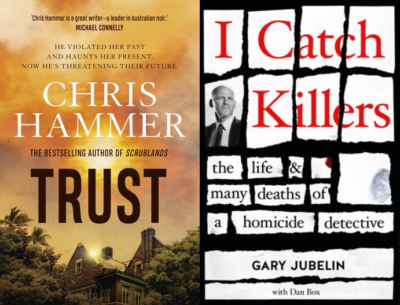 Administered by the BAD: Sydney Crime Writers Festival, the award will be presented on Saturday, 4 December at the State Library of New South Wales, as part of the festival.

‘After awarding the prize for four years, the judges were pleased to be able to give it for the first time to a novel,’ said the festival organisers, describing Trust as ‘an exploration of the seamier side of Sydney even in the glittering corporate towers and the mansions of haute society’. ‘We hope this inspires other novelists to see Sydney as a crime scene,’ said BAD chair Sue Turnbull.

Jubelin’s autobiography I Catch Killers, written with journalist Dan Box, ‘is the memoir of a homicide detective detailing child abductions, organised crime hits and domestic murders’. ‘Jubelin is a classic Sydney character,’ said BAD board member Michael Duffy. ‘This book brings every aspect of this to life, its courage, its risk-taking, and its colour.’

Last year’s winner was Bretherton for The Killing Streets (Hachette).