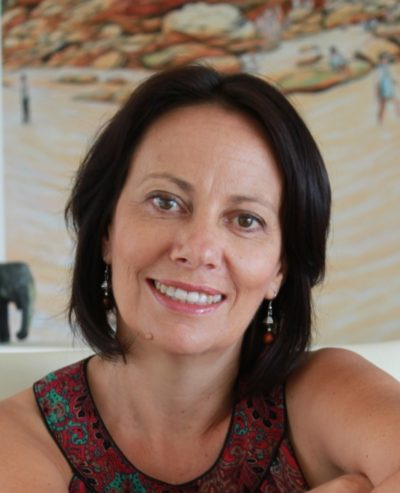 Sue Whiting on ‘Pearly and Pig and the Great Hairy Beast’

Expert worrier Pearly Woe and her pet Pig are a remarkable pair. Representatives of the Adventurologists Guild, they travel Antarctica searching for Pearly’s missing parents, in a new book for younger readers by Sue Whiting. The author tells reviewer Katie Haydon why she thought Pearly and Pig were ‘destined to grow old in my bottom drawer’—until the pandemic struck.

Pearly has the ability to understand and talk to animals. Was that a longing of yours as a child or, indeed, as an adult?

Not consciously, though my best friend and confidante as a child was my dog Tinky and I spent much time pouring my heart out to her. I don’t recall her answering, but she was an excellent listener. Like many though, I often wonder what animals might be thinking and marvel at how they communicate with each other. Wouldn’t it be wonderful to be able to eavesdrop on them? The research into this element of the story was fascinating, ranging from Dr Doolittle and zoolingualism to prairie dog prattle, amazing talking parrots, dolphin speak and more!

On your blog you mention you found Pearly and Pig and the Great Hairy Beast much harder to write than your other stories—can you explain why?

One of the biggest obstacles to overcome with any writing project is self-doubt. And with Pearly and Pig and the Great Hairy Beast I was consumed by crippling inner voices of doubt. The problem was that for the past decade or more, I had been primarily writing serious realistic mysteries for readers 10+. Pearly and Pig and the Great Hairy Beast was not serious or realistic—I mean, I put a girl and a pig on Antarctica searching for a hairy beast! What was I thinking? How was I going to make that scenario convincing and believable? It was also pitched to a younger readership, so I was writing well outside my comfort zone and I was convinced Pearly was destined to grow old in my bottom drawer. Then Covid struck, and we were locked down, and worried and anxious, and the idea of writing a serious realistic story was not at all palatable. So I dragged out the terrible first draft of Pearly and Pig and the Great Hairy Beast, and truly, it saved my sanity. It was such a joy to escape each day into Pearly’s fantastical world and have her trek across Antarctica with Pig, talk to animals and save the day.

Pearly suffers from anxiety, which clouds her decisions and plays a big part in the story. Was this emphasis on mental health an intentional decision from the outset?

Very early on when I was developing Pearly as a character, I wrote in my writing journal the sentence: Pearly is an expert worrier. I’m not sure where the thought came from, but it felt right and was intriguing enough for me to want to see where it might lead. But it wasn’t until I seriously started developing the story during that first lockdown, when the whole world was anxious, kids included, that this element grew in prominence. I sensed that today’s kids, with all they were going through, would relate to Pearly and her worries. Surely, more than ever, they would understand how paralysing anxiety can be, and I desperately wanted them to know that we all have worries, that it is part of being human, and that there are ways to overcome them. My hope is my young readers will be cheering for Pearly when she is able to act despite her anxiety. To me that is true courage.

Pearly speaks (and curses!) in many languages. Do you speak any other languages?

Sadly, I am monolingual. Though I have a brand-new baby granddaughter and am swiftly becoming fluent in ‘baby speak’. Seriously though, I am fascinated by language and languages generally, and am in absolute awe of those who can speak more than one language. How do they do that? I am the type of person who will ask questions like ‘Are you thinking in English or Japanese right now?’ Suffice to say, I had to enlist the help of many clever friends and family members who are fluent in languages other than English to help me with this aspect of Pearly’s character.

Can you say whether there will be more adventures involving Pearly and Pig? And will the beautiful polar bear, Char, make an appearance again?

I am very happy to report that Pearly and Pig will be heading into the jungles that flank the mighty Mekong River in a new adventure—Pearly and Pig and the Lost City of Mu Savan—slated for publication in early 2023. Alas, Char doesn’t make an appearance—she’d hate the heat—but Pearly does befriend a cheeky macaque monkey and rescues a baby elephant calf.