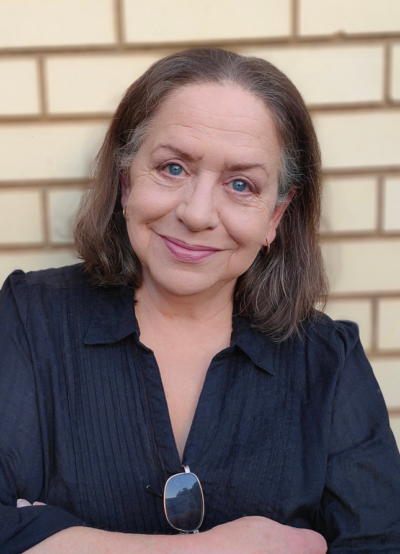 Dominique Wilson’s third novel Orphan Rock (Transit Lounge, March) spans generations and continents, following the life of a young woman living in Sydney in the late 19th century. Reviewer Deborah Crabtree said Wilson’s ‘meticulous research and attention to detail bring the past alive’; she spoke to the author about her approach to writing historical fiction.

Congratulations on the publication of Orphan Rock. It’s such an engrossing exploration of Australia’s past (both real and imagined). Can you tell us a little about how Orphan Rock came to be and what it is about historical fiction that attracts you as a creative form?

The idea to write an Australian story in a general sense came about from a comment my publisher at Transit Lounge Barry [Scott] made shortly after my previous novel, That Devil’s Madness (a novel was about the Algerian War of Independence, set mostly in North Africa) had been published. Barry thought it would be good if my next novel was set mostly in Australia, so I took his advice. At the time, I was reading a biography of Louisa Lawson (Henry’s mother), and I liked the way she had gone against the norms of the time, hiring only women for her press, and the clever way she had managed to overcome the Typographical Association of New South Wales’s attempt to impose a boycott on her journal The Dawn using the excuse that such work was detrimental to women’s health. So I started researching the history of Australia, and of Sydney in particular from around the late 1800s onwards, and slowly the idea for a story began to take shape.

I’m particularly interested in what I call ‘modern historical fiction’—i.e. from around the 1700s to World War II (as opposed to ancient history), and in particular from the time of the Industrial Revolution. It was a time that created many positive social effects, such as Edward Jenner inventing the vaccine for smallpox, an increase in the production of goods, which made them cheaper, and Louis Pasteur discovering bacteria, so that simple things like a midwife or a surgeon washing their hands before attending a patient meant people started to live longer. But the Industrial Revolution also had many negative social effects—work that had always being done at home in cottage industries was now being done in factories, with harsh and unsafe working conditions. Labourers and miners worked 14-hour days for very low pay (until unions were created), child labour increased, and women were paid half of what men earned for doing the same job. It meant an increase in wealth for the middle and upper classes, but not for the lower classes. These situations offer a lot of ideas for a writer.

For me, what’s particularly interesting about that time is that it was also a time when some people of influence were developing a social conscience, and writers in particular used their skill to make their readers (at the time, the middle and upper classes) aware of these conditions. So you have Victor Hugo in France writing Les Misérables, Harriet Beecher Stowe in America writing Uncle Tom’s Cabin and in England Charles Dickens writing books such as Oliver Twist. Interesting times!

I imagine for a novel this vast in scope a large amount of research is required. How do you keep a handle on such a long timeline? What methods or writing habits do you use to pull all that information together and decide what goes into the novel?

It does require a huge amount of research! When I have nothing but a germ of an idea—a real person or event that makes me think there could be a story there—I start researching that time period. Sometimes I need to go forwards in time, sometimes backwards. For example, my novel The Yellow Papers (set in Australia and China) started with a photograph of a group of boys that had been sent to America after the two Opium Wars, to learn the ‘secrets’ of the West. So I started there and moved forward, where I found out that Australia too had, at a later time, received Chinese students under the Colombo Plan. With That Devil’s Madness I moved back in time, because of course there can be no war for independence unless there has been a colonisation earlier on. For Orphan Rock, I’d found out about Louisa Lawson and The Dawn, but didn’t want to have Louisa as a main character, so started researching about 50 years before the creation of The Dawn and moved forward from there.

I always start with an Excel file to create a timeline. On the vertical axis are the years—one cell for every year of my story—and on the horizontal axis is each character—so for Orphan Rock I had ‘Bessie’, ‘Lottie’, ‘Josette’ etc., plus I also included one column for ‘world history’ and one for ‘Australian history’, because I believe major events in history affect ordinary people in some way, and hence would affect my characters. I also have a column where I jot down changes in fashions and hairstyles, books that were popular at the time etc. Then I research via books, articles, newspapers from that time, relevant newsreels on YouTube and so on, and each time I come across an event or something that I think I can use, I put it in the appropriate column for that year and that character.

For example, when the Royal ‘Bondi’ Aquarium and Pleasure Grounds first opened at Tamarama Beach in 1887, I thought it quite probable that a young woman like Bessie would want to go there with her friends. And when, during the depression of the 1890s, many Australian banks collapsed, of course it would affect my characters in some way. By the time I’ve finished the major part of my research, that Excel timeline gives me a pretty clear impression of life during that time period, though I always have way more information than what I can use.

I love that you’ve included real characters in the story, such as Quong Tart and Tilly Devine. How do you balance fact with fiction when using real people in your narrative? And did you unearth any surprises in your explorations?

Whenever I decide to include a real person, I first research their lives—biography, newspaper articles from that time that may mention them, court records if appropriate, any letters or such they may have written and so on—and each of these little bits of information goes in my Excel timeline. This allows me to build my character and also stops me making factual errors, like having Bessie meet with Quong Tart if in fact he was away in China at the time, for example. I never change the known facts—just build a story between the gaps. With Quong Tart, I was lucky enough to find his biography, written by his wife a few years after his death. This was a real gem, because as his wife, she was able to write a much more personal account of the man than what an academic could ever have done.

I think we need to remember that these real people may be ‘famous’ for us, but when they were alive, they were just ordinary people living their lives as best they could. So the fact that Louisa held her Dawn Club meetings in Quong’s tearooms makes it perfectly reasonable for Bessie to know Quong and some of his staff, and also reasonable for Josette, who loved attending art exhibitions in Paris, to meet Paul Poiret at one such place, when he was just a struggling designer who visited these exhibitions for inspiration.

And yes, there were many surprises and interesting things I found out while researching Orphan Rock, like those crazy cabarets in Paris, one of which had a candelabra made of human bones, or the time Parisians had to eat their zoo animals! In fact, if anyone is interested, I started a blog about these things on my website.

While reading Orphan Rock I was struck by similarities between the smallpox outbreak and the pandemic we’re living through at the moment. I wonder if this was something you were conscious of when you were writing the novel. Do you think the past can inform the present in any way—and is this something you explore while writing about real historical events in your fiction?

Not only the smallpox outbreak, but also the Spanish flu pandemic after the First World War (I wrote about those similarities on my blog). Spanish philosopher George Santayana is credited with saying, ‘Those who cannot remember the past are condemned to repeat it,’ and Winston Churchill once wrote, ‘Those that fail to learn from history are doomed to repeat it.’ I think that’s definitely true. Look at the Spanish flu—they were quick to stop restrictions and the wearing of masks, then a second wave hit, and then a third, and thousands died. So yes, the past can definitely inform the present, and I was very aware of it writing Orphan Rock.