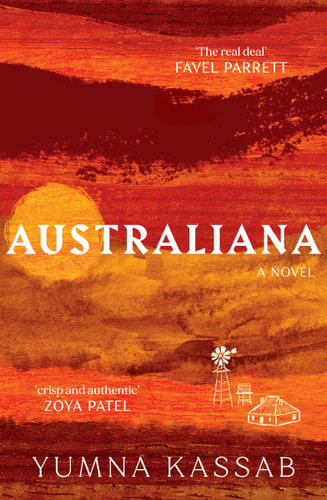 The heart of Australiana is an examination of settler Australia, disrupting the conception of town and rural settings so common in the nation’s literary imagination. First Nations writers have significantly critiqued national identity and settler invasion in a number of acclaimed novels such as Melissa Lucashenko’s Too Much Lip, Tara June Winch’s The Yield and Nardi Simpson’s Song of the Crocodile; in her debut novel Yumna Kassab again takes a scalpel to colonialism in order to reveal its manifest ugliness. Structurally, through interwoven vignettes from different characters’ points of view, Australiana mimics the short story collection, extending the economical approach to storytelling Kassab utilised to great effect in her successful collection The House of Youssef. It is an intriguing departure from conventional novel writing, building plot and themes (which include historical myths of Australia and the ramifications of domestic and sexual abuse) using experimental devices. At their most frightening, vignettes like ‘Speed Dating’ redefine the power of microfiction and feel like a gut punch. In the book’s second half the plot involving the historical figure of Captain Thunderbolt, a bushranger who escaped from Cockatoo Island, feels less impactful than the vignettes, which create a more well-rounded narrative. Further rendering with contemporary characters and a stronger presence of First Peoples’ livelihood and ongoing sovereignty may have helped. While the overall narrative of the novel occasionally lacks cohesion, Kassab creates an eerie sense of place as the reader is drawn into myriad perspectives and geographies. Without doubt Australiana is an unnerving contribution to contemporary novel writing in this continent.

Timmah Ball is a writer and reviewer of Ballardong Noongar heritage.