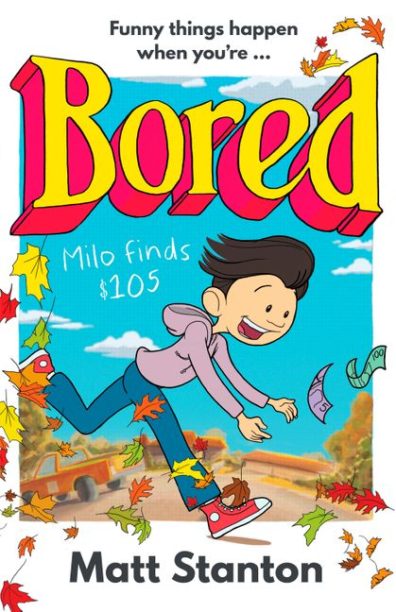 When you’re young, one of the most exciting moments in your life is finding money. Coins, cool, but actual notes—amazing! Milo, the 11-year-old narrator of Matt Stanton’s new series ‘Bored’, finds $105 dollars in his street (or ‘cuddly sac’ as he calls it). What happens after this discovery involves most of the neighbourhood, including new kid Frog, as they try to find out whose money it is and what to do with it. Milo is torn between wanting to do the right thing and trying to fit in with the others who, up until now, haven’t paid him much attention. Milo Finds $105 is about friendships and how they can morph and evolve, and with that the idea of how first impressions are not always what they seem. The language between the kids is authentic and there is a strong sense of family in the book, with Milo keenly feeling the absence of his older brother Henry who is away in the army. The chapters are short and engaging, which may inspire confidence in reluctant readers. Stanton, author of ‘Funny Kid’ and ‘The Odds’, looks to have produced another winning series if this first book is anything to go by. The next ‘Bored’ story is told from Frog’s point of view and there are sure to be more hijinks afoot.

Katie Haydon is a library officer in Geelong and a former assistant editor of Books+Publishing.