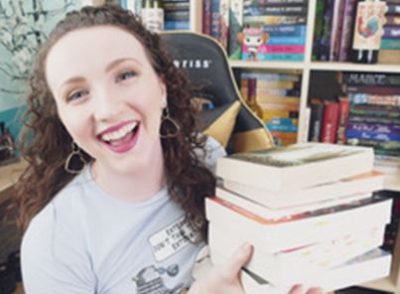 Tuning into BookTube: How publishers can work with influencers

In 2021 Kirsty Horton completed her master’s thesis at Curtin University on how publishers and BookTubers could get the most out of their commercial relationship. A BookTuber herself since 2017, Horton surveyed over 100 audience members, spoke to six BookTubers and five publicists, and analysed her own BookTube channel to find out how publishers can optimise their working relationships with book influencers.

BookTube is a niche community on YouTube that dedicates itself to discussing books. It began in the early 2010s and has since grown into a large global community of dedicated readers and book buyers. BookTubers have collaborated with publishers for the duration of BookTube’s existence, providing book reviews and discussion to engage their viewers, often inspiring them to purchase a copy of a book themselves. I spoke to Australian BookTubers and publishers alike to get an idea of how this worked and what questions people had about the process.

BookTube attracts an international audience, with over 60% of my 119 survey participants coming from outside of Australia. These viewers represent a niche category of avid readers finding new books through the internet:

Who is a BookTuber?

Anyone can be a BookTuber, and any BookTuber can become a reviewer for publishers. BookTubers typically spend over five hours per week producing up to three videos, and generally have anywhere between 1000 to over 100,000 subscribers. They report having the capacity to read up to 120 books per year, with the majority producing content according to a schedule.

Publicists are looking for quality content rather than quantity of viewers, so authenticity is important. Collaborations between BookTubers and publicists are more likely to occur when key values are shared between the two. This might mean a BookTuber with 500 followers works closely with a publishing house wanting to reach that BookTuber’s particular audience simply because it contains a high concentration of people identifying a certain way. There are of course benefits to accounts with well over 100,000 followers, as sometimes exposure at a high level is a priority for certain titles.

How to work well with BookTubers

There are significant benefits to working with this online community because of the personal connection BookTubers have with their followers, who are also avid readers. The nature of BookTube fosters the sense of a personal relationship, where viewers trust the opinions of the BookTuber. Seeing someone’s face regularly, sharing parts of their life and engaging in asynchronous conversation places significant influence in the hands of BookTubers.

The high concentration of voracious readers in the online space is extremely valuable to publishers and is accessible via BookTubers. By utilising BookTube as a publicity tool, publishers dramatically increase a book’s level of exposure to potential book-buying consumers reading all genres. There is a variety of content that performs well for inspiring book purchases and driving engagement.

The following is what BookTubers and publishers alike can focus on producing/requesting to maximise the benefits of their commercial relationship and meet viewers’ preferences:

As to what kinds of videos directly lead to sales, 66% of viewers reported buying a book previously after viewing a reading wrap-up, followed by book reviews (55%) and book hauls (50%).

Typically, BookTubers will provide a star rating out of five to indicate how much they enjoyed a book. While I found that the purchasing decisions of 84% of viewers are influenced by the BookTuber’s star rating of a book, this should not prevent publishers from engaging with BookTubers, as 66% of viewers will still read a book even if a low (less than three-star) rating of the book is given.

BookTubers report that clear expectations from publishers enable them to produce the most appropriate content to help publicise a book. All BookTubers said receiving a book one to three months in advance helps them to fit it into their production schedule and allows time to provide a review around publication date.

It is important to also share insights regarding review expectations around solicited and unsolicited proof copies of books. There is a lack of clarity for BookTubers about what is expected of them when receiving an advance reading copy of a book from a publisher. Often, no deadline is communicated and, typically, this leaves BookTubers to assume that the book’s publication date is the deadline for the review. Furthermore, it is often unclear whether a review or some other format would be more useful—and whether solicited reviews should take precedence over unsolicited.

With two out of the five publicists I interviewed claiming reviews are useful within a six-week window from publication date, and three out of five claiming they are useful ‘at some point’, this could be communicated to BookTubers to alleviate stress for them if reviews are not provided on the exact publication date. Four out of six BookTubers mentioned that reviewing all books sent to them—solicited and unsolicited—within this timeframe causes them stress. However, one publicist expressed an opinion—also shared by the other publicists who were interviewed—about unsolicited review copies:

We can’t really have any expectations because we’re just sending them books, and if they don’t want to post about it, they don’t have to, and that’s just part of the general publicity process.

Communication is key to a successful commercial relationship between BookTubers and publicists. What may seem obvious to one is often a complete mystery to the other, so it’s important to never make assumptions. However, unlike most other social media platforms, YouTube does not have a direct messaging function and if a BookTuber does not provide a means of contact, it can be near-impossible to connect with them and open up this much-needed communication. All publicists I spoke with noted that it is difficult to find the right person for certain genres, so using the ‘about’ page on YouTube to list preferred genres, contact details and key values that the BookTuber aligns with is a very helpful way to let publicists know their interests.

When it comes to reviewing individual titles, it is a common belief that single-book review videos perform badly. However, my research indicated that they are a slow-burn form of video that is timeless, and therefore exponentially gather views and engagement in a way no other type of video does. With most publicists seeking quality of content over quantity, thoughtful reviews are highly sought after and valued. Genuine, thoughtful content makes more sales as it can be more effectively used as publicity material.

By understanding how BookTubers create their content, it is easier to provide the right support and materials to improve the working relationship with them. Knowing where difficulties stem from, such as communication, paves the way to solving problems and boosting the productivity and success of collaborations between BookTubers and publicists.

BookTube is a highly beneficial platform to engage with, so I encourage you to start conversations with BookTubers you may already be in contact with—or new faces—and reap the benefits of meaningful and well-managed collaborations with one of the most influential online book communities.

Kirsty Horton completed her MA in Professional Writing and Publishing at Curtin University in 2021 and works as an editor at Fremantle Press through the Minderoo Editorship. In 2017 she completed her BA in history at the University of Western Australia. She is the face behind @ozbooksnail, where she produces content on her blog, YouTube channel and Instagram account to discuss all things bookish.