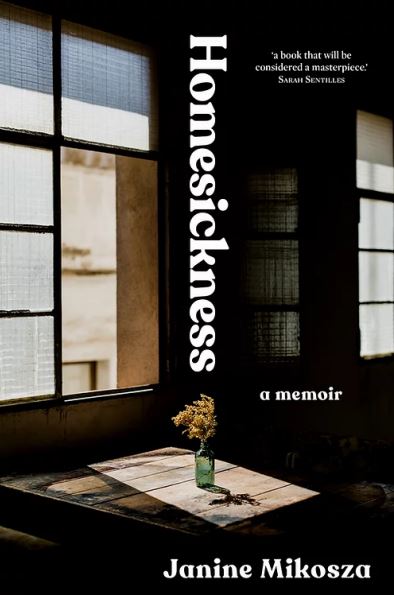 ‘I can’t escape myself or my past. There’s no way out,’ a character named Janine (‘Jin’) muses to an unknown interviewer near the beginning of artist and writer Janine Mikosza’s debut memoir Homesickness. Framed as a conversation between the two, each chapter is dedicated to the many sections in a house (‘Shed’, ‘Laundry’, ‘Hallway’, etc.). In each, Jin takes the interviewer to a different part of Australia, recounting her upbringing via the 14 houses she lived in pre-adulthood, sometimes depicted through illustrations by Mikosza dotted throughout the book. As the extended conversation slowly unfolds, akin to one between therapist and patient, we find out more about Jin as they chat about deferred pain, repressed memories and the desire to heal—Jin often prevaricating, the interviewer gently urging on. What differentiates Homesickness from other memoirs is its sense of remoteness—Mikosza refers to herself in the third person throughout, lending a dissociative, ‘outside-looking-in’ quality to the story, especially as Jin’s unnamed interviewer is implied to also be the author. Mikosza’s skill as a fiction writer is clear here: not only does the narratorial device demarcate a protective boundary between self, character and reader, it also underscores the unreliability of human memory, particularly one that has been transmogrified by the blunt force of complex trauma. A work of meta-nonfiction comparable to Heart Berries (Terese Marie Mailhot) with shades of Book of Mutter (Kate Zambreno), Homesickness exemplifies Jin’s words halfway through the book: ‘Storytelling is different from telling your truth.’