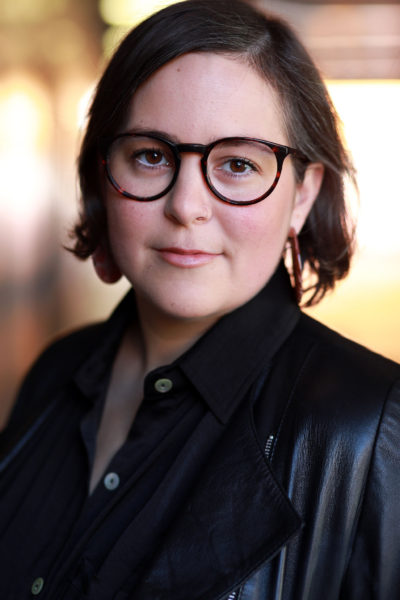 Set in the rural New South Wales town of Durton, Hayley Scrivenor’s debut novel Dirt Town (Macmillan, May) centres on the disappearance of a young girl named Esther. Reviewer Kate Frawley describes Dirt Town as a‘complex and multi-layered whodunnit’ that delves into the nuances of rural Australian life to create a ‘story of small-town life and isolation, childhood, motherhood, trauma and grief’. She speaks to the author.

Your use of a ‘Greek chorus’, the voices of the children of Durton, is a fascinating narrative device that punctuates the story and provides insights into what has happened, what is happening and what might happen. What inspired the use of this collective voice in your novel?

I started a PhD in creative writing in 2016. It can be dangerous to ask me about collective narration because my research project looked at novels that had Greek chorus-like narration, and I can go on a bit. But I do have a clear sense of where Dirt Town the novel started. I sat down to write a short story from the point of view of the children of a small town, kind of like the one where I had grown up. What I wrote was largely just these kids coming home from school, but there was an energy in it that made me think it could be a novel. That writing is still in the book, pretty much as it was written. It occurred to me that if I was in these kids’ heads, then I needed something for them all to be looking at, thinking about: an experience that was as big as the town. One of the next flashes I had was that a girl had died, and the story grew from there.

Isolation—whether emotional, mental or physical—plays a large part in this novel, for the community as a whole and for the majority of the central players. Did this lead you to the rural setting, or did the isolation of the setting imbue your characters?

I love this question! Definitely the place came first. When a young girl goes missing on her way home from school, it takes time for police to reach the town, for the search to begin. But as much as the story is about what it means to be physically isolated in that way, I think every person has felt confined by the place they live. I think one reason this story has resonated with people, including readers outside Australia, is that we have all felt unseen, unheard or far away from those around us, one way or another.

There are elements of small-town life in Dirt Town that are captured so perfectly and beautifully, from those who’ve lived there their entire life to those that have left and returned and those who will always be considered newcomers. How did you infuse these differing perspectives and voices with such integrity?

There are a lot of different voices in the novel, but my goal was that you could open to any page and instantly know who is speaking at a given time. That part takes time—sitting with the characters and thinking about how they see the world. Each character has their own language and imagery that moves with them through the book.

As I think about it, I realise each of the characters I’ve chosen are either outsiders to the town (like the mother of the missing girl, who moves there for love, initially), or children. I left the small town where I grew up when I was 12 and that’s how old Ronnie and Lewis—friends of the missing girl who both narrate significant sections of the book—are when the events of the novel chiefly happen. I think we think about childhood as an innocent time, but I didn’t experience childhood in that way. Not that anything that horrible happened to me—certainly my best friend never went missing—but the definition of being a child is that you’re not in control. I think we undersell the depth of emotion children experience. We think that the stakes are lower, or what happens is less overwhelming—but emotions don’t work that way. Fear, anxiety, love: these big emotions are all there, it’s just that as a child you can do less about them.

Writing twists, red herrings, family ties, and community and police politics on top of plotting a crime must have had you juggling multiple layers of story during every moment you were working on the novel. How did you thread these complexities together and track each detail to ensure that the story remained both gripping and believable throughout?

The feedback I got as part of being shortlisted for the Kill Your Darlings Unpublished Manuscript Award helped me take the book to another place, structurally. Dear friends and my long-suffering PhD supervisor have read it countless times (as in, I have genuinely lost count because it’s happened so often). And my publisher, Pan Macmillan, were amazing in helping me get it to where it needed to go. Help also sometimes comes in less obvious or direct forms. I read Lyn Yeowart’s The Silent Listener at a point in the structural edit where I was just despairing that I could make a certain event feel believable, something the whole book hinged on. Reading her book, and loving it, came at the right time. It reminded me that the reader hasn’t read your book a thousand times, that they want to be taken into a world. You’re not fighting them, you’re persuading them, and they want to be persuaded. The rest is just hard work, and that’s less intimidating somehow. And that’s what is great about a novel. As I say in my acknowledgements (which are on the long side!), book writing is an iterative process—the joy is you don’t have to get it right all at once.

In practical terms I’ve tried everything to keep track of my story: spreadsheets, post-it-notes, mud maps, prayers to the goddess Narrativa (a goddess of plot that I made up). I draw the line at animal sacrifice.

Will we see more of Detective Sergeant Sarah Michaels or is Dirt Town a standalone peek into her story? I’d love to hear what she has been up to since finishing her work and leaving Durton in 2001.

My next novel will be a standalone, but I do often think I’d like to return to Sarah Michaels, though I think I’d be more interested in her formative days as a young officer. Seeing Sarah in Durton lets us see her in her element—her partner Smithy respects her, she’s in control—but I’d love to delve further into some of the experiences that have made her who she is. It would be interesting to see how she fares as a young, gay cop. I’d also be more comfortable with her learning the job, as I feel I have a lot to learn about police procedure. I recently read Dinuka McKenzie’s The Torrent and you can tell she knows her stuff. That was such a great book that got me excited about detective fiction and exploring the tensions inherent in policing.