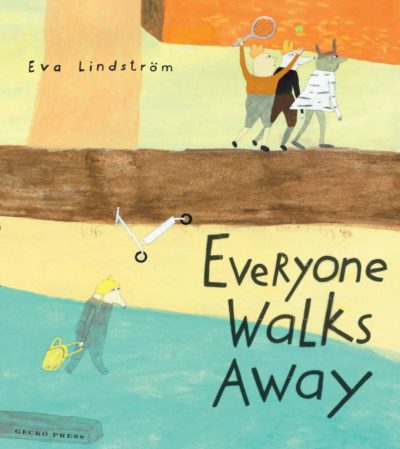 Lindström, whose work has won multiple awards, has published 35 solo picture books and has illustrated many by other authors. Several of her books have been translated into French, while two titles recently released in English are Everyone Walks Away and My Dog Mouse, both published by Aotearoa New Zealand publisher Gecko Press and translated from Swedish by Gecko publisher Julia Marshall.

According to the ALMA jury’s citation, Lindström ‘writes stories that shift between the everyday and the existential, combining shrewd humour with absurd mystery’.

‘Eva Lindström’s enigmatic picture world is constantly transforming,’ reads the citation. ‘Trees move abroad, dogs take on giant proportions and objects vanish, suddenly to reappear. With rapid brush strokes and dense colouration, Eva Lindström creates an ambiguous dialogue of text and image. The boundary between children, adults and animals is fluid. With great gravity and wild humour, they wrestle with the eternal questions: Who are we? Where are we going? Who took our hats?’

As previously reported by Books+Publishing, six Australian authors, illustrators and organisations were nominated for the award.

Administered by the Swedish Arts Council in honour of the late children’s book author Astrid Lindgren, the ALMA is the largest international children’s and young adult literature award in the world. For more information, see the ALMA website.